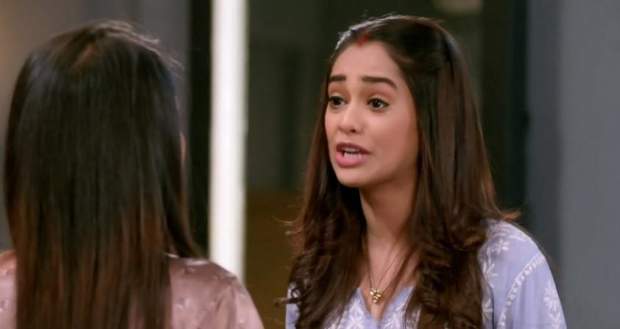 Today's Kumkum Bhagya 3rd May 2022 episode starts with Prachi telling Sahana that she made a mistake by trusting Ranbir and her love for him and thinking that Ranbir loves her too.

Sahana asks Prachi to calm down and take rest as she needs to destress her mind for the health of her baby.

Breaking down into tears, Prachi expresses her regret for listening to her heart instead of her brain.

Meanwhile, Rhea jumps with excitement and happiness as she gets to share the same room as Ranbir and tells Alia about her feeling superior.

However, things take a different toll as Ranbir wakes up and refuses to share the same bed as Rhea.

Although furious at hearing the options, Rhea agrees to sleep on the couch and proceeds to spend the night separate from Ranbir.

In the middle of the night, Rhea appears in Alia’s room and announces how Prachi is always between her and Ranbir even if she is physically not present.

Frustrated with anger, Rhea asks Alia to kill Prachi so that she can live with Ranbir in peace but Alia refuses to do so.

Instead, Alia proposes another plan of portraying Prachi as a murderer who wants to kill Rhea by instigating fake attacks on Rhea.

The next morning, Rhea comes to the breakfast table and requests Pallavi that she will eat with Ranbir in their room.

Pallavi and others also follow Rhea except for Prachi who silently eats her breakfast on the dining table.

On seeing everyone, Ranbir gets happy and thanks them for their sincere care.

Rhea feeds Ranbir while Prachi comes to the door and gets invited inside by Vikram.

After a critical stare game between Prachi and Ranbir, Ranbir leaves the room and goes to the study room to do some work.