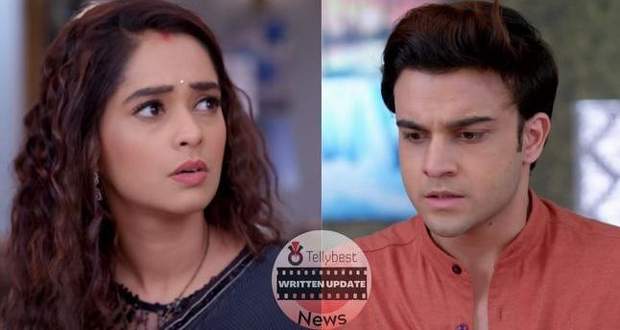 Prachi further insinuates that she feels that Rhea isn't carrying Ranbir's kid at all.

Alia retorts saying that Rhea won't do the test. So Prachi says that she won't get married to Sid.

Pallavi taunts Prachi saying that a person like her shouldn't question another's character but to remove all doubt she tells Rhea to take the test to shut Prachi up.

Pallavi tells Prachi that tomorrow Rhea will take the test and the day after Prachi will marry Sid.

Alia and Rhea go inside a room and start blaming each other for the challenge that Prachi has given her.

Rhea tells Alia that her brain is shutting down with her impending doom which is the test and she starts having a panic attack.

Alia pleads with her to calm down and tells her to get a fake test done through her doctor friend.

Meanwhile, Prachi keeps wondering why Rhea being her own sister behaves in such a manner with her.

Prachi also wonders why is Rhea the root of all her problems when suddenly, Ranbir appears at the door.

Ranbir thanks her saying he is just happy knowing the fact that only Prachi will be the mother of his child, which implies Rhea was not impregnated by him.

Prachi feels astonished and happier than she has ever felt in a long time.

In the meantime, Sid keeps recalling Alia's threats, when Prachi knocks at his door.

Sid starts screaming at her for putting Mihika at risk. Prachi asks him to calm down as she knows Alia won't even touch Mihika.

Prachi assures Sid that the truth will come out tomorrow, Mihika will also be back home safe and sound and Ranbir and Prachi will finally reunite.

Meanwhile, Rhea keeps calling her doctor friend who picks up her phone after a lot of calls, and Rhea explains to her the entire situation.

Rhea's doctor friend tells her that this would require a hefty bribe, Rhea cuts the call abruptly as she sees Pallavi.

Alia lies to Pallavi that since Prachi has accused Rhea, Rhea has become very panicked and is also feeling confused and embarrassed.

Pallavi feels sorry for Rhea and comforts her saying that to reduce Rhea's anxiety they will get the test done today itself.

This leaves Rhea and Alia perplexed about what they will do now. Pallavi informs her that Ranbir will accompany her to take the test.

Meanwhile, Dida embraces Pallavi for coming up with her brilliant idea to challenge Rhea, but Prachi is lost in her thoughts reminiscing about Ranbir.

© Copyright tellybest.com, 2022, 2023. All Rights Reserved. Unauthorized use and/or duplication of any material from tellybest.com without written permission is strictly prohibited.
Cached Saved on: Monday 21st of November 2022 08:26:36 AMCached Disp on: Sunday 4th of December 2022 11:34:41 PM