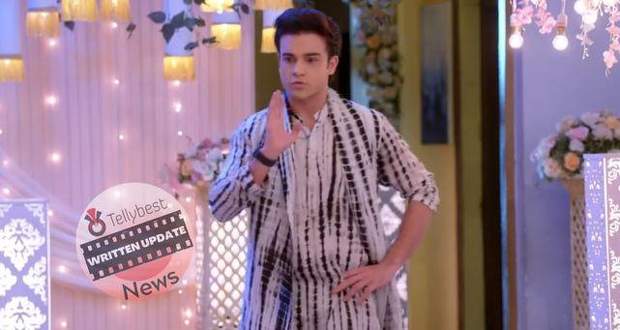 Today's Kumkum Bhagya 3rd October 2022 episode starts with Rhea saying that everyone has already seen and heard the truth in the DNA reports and from Siddharth’s mouth.

Prachi claims that it was all a lie that Sid had to tell because of her dirty planning and plotting.

Interrupting the conversation, Alia steps in and says that everyone in the house is a liar except Prachi.

Getting confused with the current discussion going on, Ranbir turns to Prachi and asks her what she is trying to say.

Prachi tells Ranbir that Rhea always had problems with Prachi as she thought that Prachi was trying to snatch Ranbir away from her.

When Rhea got to know about Prachi’s pregnancy, she decided to use it against her so that she could throw Prachi out of the house.

Prachi declares that she is going to be the mother of Ranbir’s child, not Siddharth’s which changes Ranbir’s mind totally.

Ranbir says that Prachi is telling the truth as she cannot lie anytime as per her teachings.

Boiling with anger, Rhea asks Ranbir not to be an emotional fool and reminds him how Sid confessed that he was the father of Prachi’s baby.

Just then, Siddharth steps in and says that he lied earlier because Alia and Rhea have kidnapped Mihika and will kill her if he disobeys them.

As Rhea denies the accusation, Ranbir asks Rhea where Mihika currently is as she was supposed to attend the engagement.

Rhea gets silent while Prachi claims that Rhea and Alia were blackmailing Sid by using Mihika as their hostage.

While leaving the function, Alia trips on the floor as Sahana intentionally puts her leg in front of her and gets her phone snatched by Aryan.

Everyone blames Alia and Rhea for kidnapping Mihika, while Ranbir proceeds to put the ring on Prachi’s finger.

Rhea rushes to Prachi and pushes her off which breaks Prachi’s imagination and she finds herself standing with Sid.

Picking up the ring, Ranbir comes to Prachi and Sid to give it back but intentionally drops the ring again.

Everyone begins to search for the ring but does not find it anywhere. Ranbir suggests preparing a new ring which stops the engagement.

Later, Aryan confronts Ranbir about putting the ring inside his pocket so that the engagement does not happen.

Ranbir admits it after Aryan takes out the ring from his pocket forcibly and says that he has ordered the new pair for him and Prachi.

On the other hand, Rhea tells Prachi and Sahana that Ranbir is eager to throw her out of his life and is hurrying to arrange another ring.

Prachi overhears Rhea making an appointment for a deep-tissue massage on the phone when she goes to her room to talk with Rhea.

© Copyright tellybest.com, 2022, 2023. All Rights Reserved. Unauthorized use and/or duplication of any material from tellybest.com without written permission is strictly prohibited.
Cached Saved on: Monday 21st of November 2022 04:47:30 PMCached Disp on: Thursday 1st of December 2022 12:40:26 PM