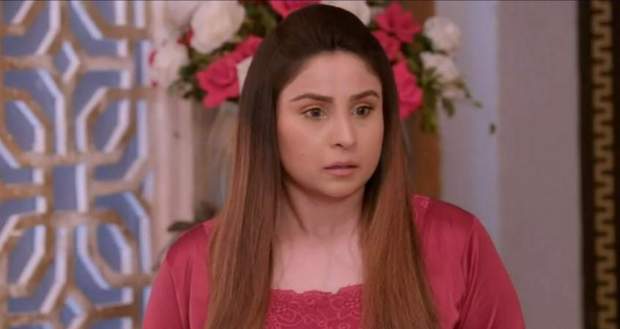 Rhea tells Alia that every time Prachi tries to leave the house, someone from the family stops her from doing so.

Rather than giving birth to her child, Rhea suggests that she should kill them before they are even born.

Alia reminds Rhea that she is not pregnant in reality and should tell these things to Pallavi if she wants to throw Prachi out of the house.

Rhea agrees with Alia and decides that she will talk to Pallavi the next morning.

The next morning arrives with Prachi waking up and spotting Ranbir sleeping at the bedside while holding her hand.

Prachi feels bad for Ranbir and says sorry as soon as he wakes up.

After Ranbir leaves the room to change his clothes, Prachi shares her inner thoughts with Sahana about not wanting to leave anymore.

Prachi tells Sahana that she thinks that she is not doing things right and should not leave Ranbir.

Meanwhile, Rhea comes to Pallavi and her fake crying to attract Pallavi’s attention.

Pallavi makes Rhea seated and feels bad when Rhea tells her that her insecurities are not letting her health improve.

In order to regain her baby’s health, Rhea asks Pallavi for one wish that she will fulfill and tells Pallavi to ask Prachi to leave the house.

Pallavi agrees to ask Prachi to leave the house but says that she will do so after 9 months and Rhea has to divorce Ranbir in the present.

Hearing that, Rhea gets stunned and leaves without listening further with Pallavi following her.

Pallavi stops Rhea and asks her to understand the situation instead of acting like a child.

While Pallavi tells Rhea about her plan of making Prachi stay in the house, Vikram and Dida come there and ask Pallavi to tell them too.

Pallavi somehow manages to distract Vikram and Dida but Dida suspects something fishy going on.

Elsewhere, Prachi confesses that she still loves Ranbir which Ranbir overhears and kisses Prachi on her cheek.

Aryan comes in between the argument caused by the kiss and tells that kissing is not a big deal.

As Sahana asks Aryan to stop talking, Aryan kisses Sahana on her cheek to prove his point making Sahana chase him to beat him up.

Prachi bumps into Rhea and confronts Rhea’s accusations of trying to steal Ranbir from her.

However, Prachi comes off strong and tells Rhea that Ranbir never loved her and was always Prachi’s husband.

© Copyright tellybest.com, 2022, 2023. All Rights Reserved. Unauthorized use and/or duplication of any material from tellybest.com without written permission is strictly prohibited.
Cached Saved on: Monday 21st of November 2022 05:07:05 PMCached Disp on: Thursday 1st of December 2022 11:11:34 PM