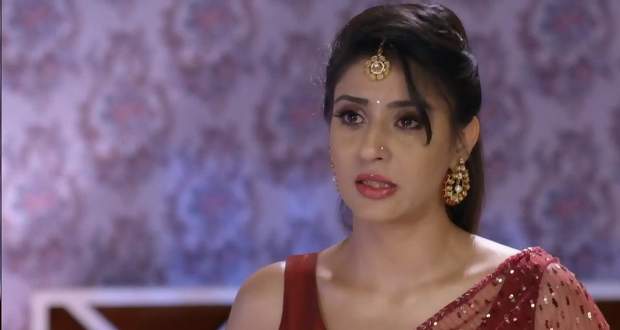 Today's Kumkum Bhagya 4 December 2020 episode starts with Abhi informing Meera about Rhea’s wish. Meera tells him that she will be the luckiest woman in the world if she will be married to him.

Vikram informs his mother that Pallavi has put a condition in front of Ranbeer that he has to keep the distance from Prachi if he wants to see his mother alive.

Vikram goes to talk to Pallavi, while Pallavi feels bad on hurting his son’s feelings. Meanwhile, Dida hugs Ranbeer and feels proud of him for sacrificing his love for his mother.

Aliya tells Rhea about Meera’s love for Abhi. Rhea gets excited to know that Meera is in love with Abhi.

Prachi gets emotional on thinking about Pragya’s pain of getting separated from Rhea. On the other hand, Ranbeer cries on losing the love of his life Prachi.

He makes a call to Prachi and apologises to her for breaking his promise. He tells her that his mother got a heart attack the previous night.

Prachi decides to go to meet Ranbeer and Pallavi in the hospital. The next morning, Aliya congratulates Meera for getting married to Abhi.

She tells Meera that Abhi has started getting feelings for her and that’s why he has proposed her for marriage.

Abhi finds himself in a dilemma as he doesn’t want to marry Meera. He decides to inform Pragya so that she could make Rhea understand everything.

He messages Vikram to send Prachi’s mother number to him. Abhi calls on that number but Pragya doesn’t pick the call.

He decides to meet her outside somewhere so he drops a voice message to Pragya to meet him near her house.

© Copyright tellybest.com, 2020, 2021. All Rights Reserved. Unauthorized use and/or duplication of any material from tellybest.com without written permission is strictly prohibited.
Cached Saved on: Sunday 17th of January 2021 09:37:52 AM