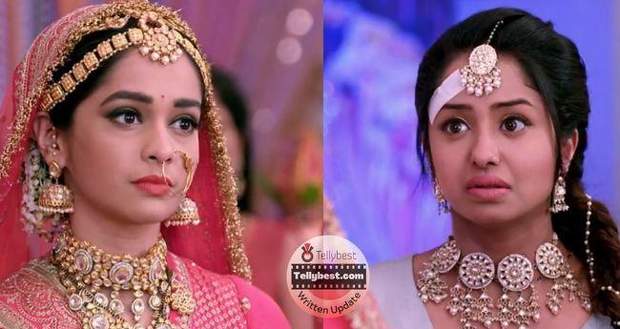 Today's Kumkum Bhagya 4th January 2023 episode starts with the doctor entering and announcing that Rhea is not pregnant in reality leaving everyone’s shocked.

Alia says that the doctor is lying and has no credibility about the results.

The doctor replies that he cannot lie as a doctor and is just telling the truth as he reveals the original reports that state that Rhea is not pregnant.

Rhea accuses the doctor of lying and manipulating the reports and asks him who called him there.

Prachi says that she called the doctor there as she knew that something would go wrong the moment Alia went to the hospital.

The doctor says that he first received the report as mail and shows it to everyone claiming that the mail cannot be manipulated.

Rhea says that the doctor is lying and has been bribed by Prachi after which, the doctor shows everyone the camera footage of his cabin.

Everyone watches Rhea threatening the doctor not to reveal her fake pregnancy in the footage while Rhea continues to deny everything.

Alia says that everyone is trying to plot against Rhea while Ranbir asks Alia to let Rhea and Prachi talk to each other as sisters.

Rhea says that Prachi is the one who is lying and is not pregnant which triggers Prachi and she snatches away Rhea’s artificial belly.

Everyone gets shocked utterly while Rhea runs inside after saying that Prachi will be responsible for her death.

Ranbir stops Prachi from going after Rhea and says that Rhea will not do anything to herself.

However, Prachi requests Ranbir to let her go check on Rhea as she loves her sister as her own family.

Prachi runs inside while Pallavi tells Alia that she had not expected such low thinking from her.

Rhea enters her room with a barrel of kerosene and waits for someone to come after her so that she can start her drama.

As kerosene is very dangerous, Rhea finds another alternative to suicide and chooses to cut her wrist with a knife.

Prachi comes to stop Rhea and watches her crying with the knife at her wrist.

Seeing that Sahana thinks that she is acting, Rhea slightly cuts her arm which freaks out Prachi and she rushes to call Ranbir.

At the same time, Alia shows an attitude toward everyone instead of confessing her crimes which makes everyone angry.

Vikram says that Alia never became loyal to Abhi so they should not have expected anything from her.

Pallavi asks Alia to get out of their house immediately as she has crossed all limits of decency.

Aryan opens the door and announces that he is breaking his ties with her as she never managed to become his mother.

Pallavi says that Aryan is not like Alia and has the qualities of his father, Purab.

As Alia leaves the house, Prachi comes running to Ranbir and asks him to help Rhea or else she will kill herself.

© Copyright tellybest.com, 2022, 2023. All Rights Reserved. Unauthorized use and/or duplication of any material from tellybest.com without written permission is strictly prohibited.
Cached Saved on: Wednesday 25th of January 2023 09:36:38 AMCached Disp on: Tuesday 31st of January 2023 06:09:05 PM