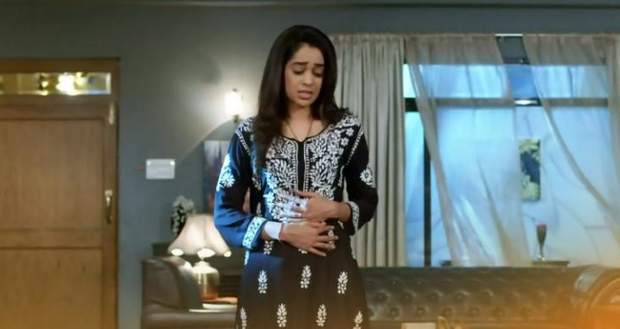 Today's Kumkum Bhagya 4th July 2022 episode starts with Prachi talking to herself and reminding her that she has to live happily for the sake of her child.

Prachi promises her baby that she will give the love of all the family members by herself and will never let her baby feel lonely.

While being reminded of Ranbir's betrayal, Prachi says that she will let her child meet with Ranbir but tells them to never trust him.

Meanwhile, Rhea catches Ranbir outside Alia's room and suspects him of eavesdropping on their conversation.

Both turn in opposite directions and suspect each other while walking in their own ways.

Prachi decides to leave the house as she wants a loving future for her child.

After packing her bags, Prachi stops in front of Ranbir's room and watches Rhea and Ranbir sharing a bed.

Prachi wishes Rhea to have a healthy child and begins to leave the house with her suitcase.

However, Prachi gets stopped by Ranbir as she tries to exit from the main door.

Prachi commands Ranbir to let go of her hand as she is determined to leave the house.

Ranbir requests Prachi not to leave the house as he wants her to stay with him.

Reminding Ranbir about his betrayal by marrying Rhea, Prachi asks him why he did not stop her in the past when she left the house.

In reply, Ranbir questions Prachi why she never came to explain herself when he suspected her to be with Siddharth.

This angers Prachi and she pushes Ranbir away while stepping outside.

However, the whole conversation with Ranbir turns out to be an illusion as Dida is the one who stops her from leaving.

Dida tells Prachi how she smiles only because of her and asks her to live with her for a few more days.

Prachi agrees but takes a promise from Dida that she will not stop her again when she decides to leave.

Meanwhile, Ranbir wakes up and leaves the room after seeing Rhea sleeping on the bed.

He plans to sleep in the study room as he wants to keep the distance between himself and Rhea.

On his way, Ranbir meets Vikram and Pallavi who offer him to join them on the terrace.

However, on hearing that Ranbir is headed to the study room, Pallavi asks him to spend some time with Rhea.

Pallavi says that Rhea needs Ranbir by her side as she is pregnant and forces Ranbir back to his room despite his resistance.

© Copyright tellybest.com, 2022, 2023. All Rights Reserved. Unauthorized use and/or duplication of any material from tellybest.com without written permission is strictly prohibited.
Cached Saved on: Tuesday 22nd of November 2022 06:16:49 AMCached Disp on: Saturday 3rd of December 2022 02:15:00 PM