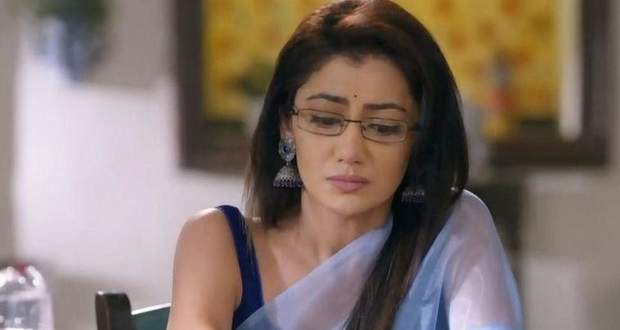 Today's Kumkum Bhagya 4 March 2021 episode starts with Aliya telling Pragya that she is going to give her the job only after the trial for three days.

Aliya adds on that if Pragya works well then, she is going to get six thousand rupees as a salary.

Pragya tells that the salary is less as she was offered fifteen thousand rupees as salary in her old house.

Aliya gets irritated by her words but Pragya manages her.

Later, Tanu asks her about her name so Pragya tells her name is Gayatri.

Then Mitali tells Gayatri (Pragya) to clean the first floor.

On the other hand, Prachi gets to know about Ranbir’s plan to marry her by Palak.

Prachi gets angry while Palak says Ranbir loves her so much and wanted to marry her.

But still, Prachi scolds Palak for supporting Ranbir and leaves from there.

Pragya enters Abhi’s room holding the mop and the bucket while Abhi sees the mop and gets angry.

Abhi comes out of the cupboard and holds Pragya’s neck, asking her if she is going to beat him.

Hearing the noise in Abhi’s room Aliya rushes there

Meanwhile, Aliya comes and beats Abhi and asks him to leave Gayatri (Pragya).

Pragya could not see Aliya beating Abhi badly so she runs out of the kitchen.

After a while, Mitali gets worried that the servant will leave the house after this incident.

Tanu says she will talk and convinces Gayatri (Pragya) to stay back.