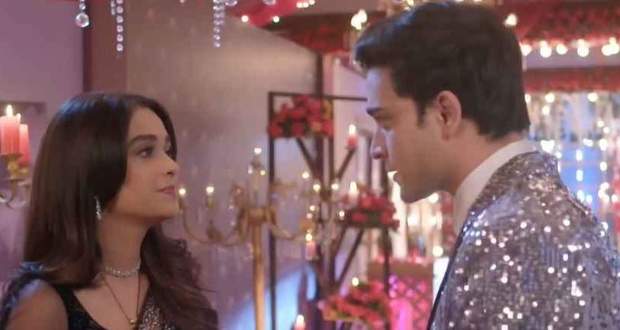 Today's Kumkum Bhagya 4th March 2022 episode starts with Prachi reminiscing about the times when Ranbir shared his excitement to be a father one day and said he wanted his offspring to address him as Bauji.

While she waits for Ranbir on the terrace, she cannot contain her excitement and gaze at the stars fluttering with joy.

As Prachi walks excitedly, she slips but Ranbeer arrives at the right time and holds Prachi in his arms, raising sparks of the excitement of love as he cleans her feet with his handkerchief.

With utmost excitement, Ranbeer asks Prachi about the news that she wanted to share with him.

Prachi gazes at the moon and feels heartfully about their longing for each other while they were separated as it was the moon who kept their love intact.

Prachi says that after this news they both will be inseparable while Ranbeer's eyes flicker with love as he plays with his fingers through Prachi's hair.

Both lock their eyes and find it difficult to control themselves as huge waves of temptation and love for one another warm up their hearts.

The excitement gets declined as Ranbeer gets a call from Pallavi and leaves after requesting Prachi to wait.

Meanwhile, Pallavi is skeptical about his husband Vikram's absurd behavior as he is nowhere to be seen.

Later, Aaliyah seems worried about the lost reports and tries to find them in the household.

Sahana is worried that Rhea is plotting something against Prachi to which Prachi replies that her time of suffering is over and only love between Ranbeer and her will stay.

Meanwhile, Vikram and Pallavi quarrel due to their misunderstandings.

Agitated on losing the reports, Rhea gets frustrated and plans her next move with Aaliyah in her room.

She calls the doctor and invites her to give this good news to the family herself.