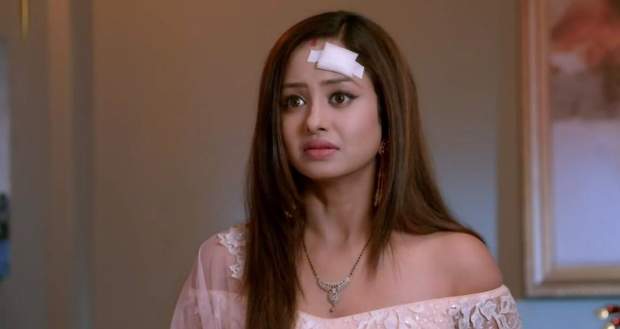 Today's Kumkum Bhagya 4th May 2022 episode starts with Pallavi stopping Ranbir from going into the study room and indulging in work but Vikram somehow manages to send her away.

Ranbir requests Vikram to let him remain busy with work so that he stops thinking about his private matters which are more stressful.

Vikram reciprocates Ranbir’s feelings with understanding and tells him to silently work without declaring it to everyone.

Meanwhile, Rhea continues to taunt Prachi and tells her not to follow Ranbir as she promised the earlier day that she will not roam around him.

Prachi answers Rhea strongly and tries to intimidate her with her savage remarks but Rhea refuses to budge.

However, Prachi leaves in the middle of their conversation as she feels dizzy due to her pregnancy.

Sitting in a corner in the corridor, Prachi quickly calls her doctor and fixes an appointment for her to visit.

Ranbir spots Prachi and asks her if she is having any problems that she wants to share with him.

Remembering Ranbir with Rhea, Prachi coldly pushes Ranbir away and asks her to return to Rhea as she will serve him readily with care.

Ranbir gets agitated on hearing Prachi’s constant taunts and asks her to stop doubting his love always.

However, Prachi tells Ranbir that she got heartbroken because she loved him and gave him her heart without knowing his intention.

Accusing Ranbir of betraying her, Prachi tells him that she never wanted to marry her but did so as he kept on insisting.

Hearing this, Ranbir loses his cool and declares that from now on he will go far away from Prachi and will not come close till she initiates their relationship by herself.

Prachi happily asks him to stay away from her and both lovers walk away from each other with tears in their eyes.

She visits the doctor and feels relieved after finding out that her baby is alright for now.

Later, Alia comes to Rhea and asks her to fake a fall from the balcony so that they can frame Prachi for trying to kill her.

Rhea agrees and Alia arranges everything so that Rhea does not get injured while falling.

While Ranbir and others continue to converse, Rhea suddenly screams for help as she fakes her fall from the balcony.

Everyone gets stunned to see Rhea fall like that and rushes to help her in getting up.

Rhea continues her act of being injured while Alia angrily screams for Prachi to come out and face her.