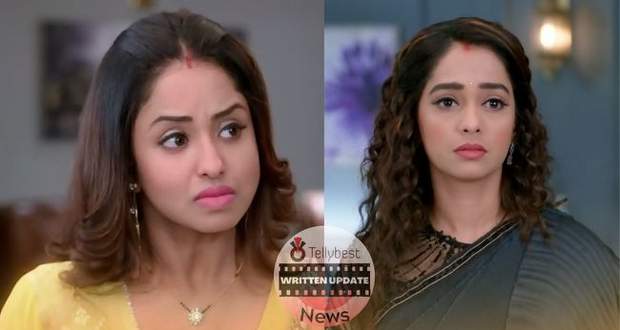 Today's Kumkum Bhagya 4th November 2022 episode starts with Dida telling Prachi that she knows that Prachi and Ranbir’s love is getting deeper for her.

Ranbir then says that he will leave now to take Rhea to the hospital to get her test done, as Pallavi has told him to do so.

After Ranbir leaves, Dida tells Prachi to go along with them as nobody can predict the games that Rhea and Alia can play to make her lose.

Meanwhile, Pallavi hears Vikram shouting at his colleagues and asks him to calm down.

Hearing this Vikram shouts at Pallavi to not give him a lecture on remaining calm. Alia is quietly hearing all of this hiding behind their door.

Alia wants to pacify Vikram but he stops her mid-sentence. Alia then goes to Pallavi and instigates her against Prachi.

Adding to Alia's words, Pallavi says that Prachi won't be able to do so anymore, as she will oust Prachi soon for spoiling Pallavi’s relationship with her son and husband as well.

Meanwhile, Prachi runs towards Ranbir to tell him that she will accompany them. Rhea upon hearing this shouts at her asking why she wants to go to the hospital with them.

Ranbir replies saying that Prachi is going to the hospital for doing her own check-up, and they all leave.

When they reach the hospital, Rhea asks for her doctor friend who isn't available at the moment as informed by the nurse.

Ranbir asks the nurse to provide another doctor to conduct the test, but Rhea insists on getting her doctor friend to perform the test on her.

Prachi hearing her repeatedly insist on her own doctor starts suspecting her motives.

Suddenly Prachi spots a doctor whom she knows from her earlier days and strikes up a conversation.

Meanwhile, Pallavi is crying at what Vikram said to her, and Alia keeps instigating her to get Prachi married to Sid as soon as possible so that she can oust Prachi from the house.

Suddenly, Dida barges in saying that she feels Sid has been abducted as his entire room is in shambles.

On the other hand, Rhea suddenly spills the glass kept there and the doctor leaves.

Rhea calls up Alia and explains to her the entire situation, and she tells her that she is in a complete mess, and cuts the call as she sees the doctor approaching the room.

© Copyright tellybest.com, 2022, 2023. All Rights Reserved. Unauthorized use and/or duplication of any material from tellybest.com without written permission is strictly prohibited.
Cached Saved on: Monday 21st of November 2022 03:10:17 AMCached Disp on: Thursday 1st of December 2022 12:59:12 PM