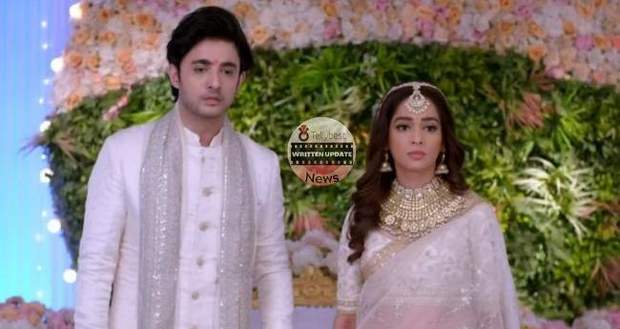 Sahana comes to Prachi and hears about the massage but does not understand why she is overthinking things so much.

Just then, Alia passes from there while acting like she is talking to Rhea and thanks her for fixing the massage appointment.

Prachi tells Sahana that Rhea cannot take a deep tissue massage as she is pregnant and somehow this is arousing suspicion in her mind.

Sahana distracts Prachi from that matter and suggests that they should go and search Alia’s room to search for clues.

Prachi agrees with Sahana as they need to find out where Mihika is kept by Rhea and Alia.

Meanwhile, Aryan asks Ranbir how he will convince Siddharth to back off from the engagement and take over his place.

Ranbir laughs and starts to explain his idea to Aryan but gets interrupted by the ring-maker who leaves after delivering the ring.

Ranbir takes the ring and hands it over to Siddharth asking him to make Prachi wear it.

Seeing Ranbir, Aryan gets more confused and asks him what he is thinking of doing by giving Siddharth that ring.

Ranbir tries to explain to Aryan again but gets interrupted by random guests which frustrate Aryan and he runs away with Ranbir to a corner with Dida following them.

Ranbir explains to Aryan that the groom’s side buys the ring for the bride and in this case, Ranbir is the one who bought it.

Dida interrupts them by saying that it is Ranbir with whom Prachi’s engagement will happen.

After Aryan realizes the whole situation, the three begin dancing and celebrating their victory.

Pallavi catches them dancing and asks what the matter is to which all act normal and do not let her know.

Meanwhile, Sahana searches Alia’s room while a goon emerges from the washroom.

After Prachi returns to the party, she acts close to Sid and tries to make Ranbir jealous intentionally.

Ranbir also does not back out and starts a dance with Rhea in front of everyone which Sid and Prachi eventually join in.

However, while dancing, Ranbir and Prachi bump into each other and begin to dance together leaving Rhea standing alone.

© Copyright tellybest.com, 2022, 2023. All Rights Reserved. Unauthorized use and/or duplication of any material from tellybest.com without written permission is strictly prohibited.
Cached Saved on: Monday 21st of November 2022 06:33:33 AMCached Disp on: Sunday 4th of December 2022 11:16:39 PM