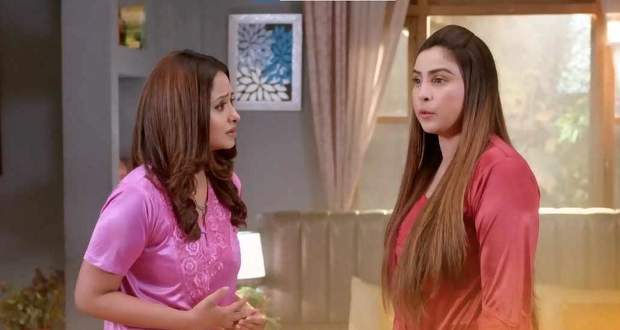 Today's Kumkum Bhagya 5th August 2022 episode starts with Rhea saying that Ranbir filled Kumkum in Prachi’s hairline only to save himself and his family.

Prachi replies boldly and says that Rhea is the one whose marriage is a lie as she blackmailed Ranbir to marry her.

While Rhea denies admitting it, Shaina comes to Rhea’s support along with Sahana coming up for Prachi.

Alia comes and takes Rhea with her while Sahana and Shaina glare at each other with anger radiating from their eyes.

As soon as Prachi leaves, Sahana and Shaina pounce on each other and begin to pull each other’s hair while having a catfight.

Aryan spots both the girls fighting and begins to encourage them in beating each other instead of stopping them.

At last, Ranbir comes and stops Shaina and Sahana from fighting with each other and asks them to say sorry to each other but no one abides.

Meanwhile, Alia asks Rhea what happened to Pallavi and what her reply was to Rhea’s demand.

Rhea tells Alia how Pallavi has asked Rhea to divorce Ranbir so that Prachi can stay as Ranbir’s legal wife in that house.

Hearing that, Alia decides to question Pallavi for the answers and tells Rhea that everyone will witness Alia’s evil side if Pallavi fails to explain things.

Alia comes to Pallavi’s room to discuss things that Dida sees and eavesdrops on their conversation from outside.

Alia tells Pallavi that she does not want to unveil her ugly and evil side but Pallavi’s doings leave no choice for her.

Telling Alia her entire plan, Pallavi says that the divorce papers will be done by that day and must be submitted to the court by the next day.

Dida overhears Pallavi’s conversation with Alia and becomes happy when she hears that Pallavi wants Rhea to divorce Ranbir.

A minute later, Rhea comes to Pallavi’s room and says that she will not divorce Ranbir at any cost.

Pallavi shuts up both Rhea and Alia and tells them that they will pretend to be taking a divorce which will never be complete.

However, Rhea and Alia do not trust Pallavi and decide to think of something by themselves.

Later, Dida comes to tell Ranbir, Prachi, and Sahana about Pallavi’s conversation with Alia but decides to keep it secret after seeing Prachi concerned for Rhea.

Ranbir talks with their baby and says that she has a number of complaints against Prachi about her not taking care of herself.

© Copyright tellybest.com, 2022, 2023. All Rights Reserved. Unauthorized use and/or duplication of any material from tellybest.com without written permission is strictly prohibited.
Cached Saved on: Monday 21st of November 2022 05:42:16 PMCached Disp on: Thursday 1st of December 2022 11:12:07 PM