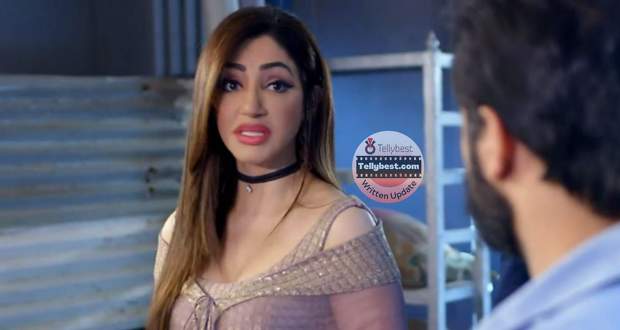 Prachi tries to keep Ranbir awake by talking to him as they cannot let Ranbir sleep at any cost.

Ranbir asks Prachi why she is caring for him that much when she was questioning his arrival at that house earlier.

Prachi commands Ranbir to stop saying silly things and says he knows well why she is acting in such a way.

Ranbir starts to drown in sleep but Prachi wakes him up by asking him to look into her eyes.

As Prachi slaps Ranbir on his cheek to keep him awake, Ranbir rubs his face against Prachi’s hand lovingly and says that those slaps seem sweet to him.

Prachi narrates an incident from the past when Ranbir bought the wrong vegetable for her and says that she is ready to eat whatever he brings for her.

Prachi asks Sid to speed up as Ranbir closes his eyes and does not open them anymore.

Meanwhile, Rhea and Alia return home in distress and Rhea goes to the kitchen to drink water.

Due to stress, Rhea’s glass slips from her hand and she falls in front of the unconscious man lying in the kitchen.

Hearing Rhea’s scream, Alia comes running and screams herself on seeing that man there and remembers how they made him unconscious.

Pallavi comes to the kitchen and asks Alia what she is doing there and why she heard their screams.

Alia takes Pallavi at a distance from the man while Rhea gets up and says that she fell down after slipping on water.

Pallavi asks Rhea to care for herself while Alia notices the man regaining consciousness.

Alia asks Pallavi to take Rhea to her room as she closes that man’s mouth by putting her hand.

At the same time, Prachi and the others arrive at the hospital with Ranbir and ask for the doctor urgently.

The nurse asks them to inform the police first which causes an argument between Prachi and her.

Ranbir gets admitted at last with Prachi watching him from outside the room and hoping for a fast recovery.

Prachi calls Pallavi and informs her that Ranbir has been shot and is admitted to the city hospital.

Pallavi goes into shock on hearing the news from Prachi and tells Rhea about it.

Alia also comes there after getting informed about Ranbir getting shot by the goons.

Vikram tries to calm Pallavi but she starts to blame Prachi for Ranbir’s condition and says that Prachi will not be spared this time.

At the hospital, Ranbir’s condition suddenly starts to get worse making Prachi and others worried about him.

© Copyright tellybest.com, 2022, 2023. All Rights Reserved. Unauthorized use and/or duplication of any material from tellybest.com without written permission is strictly prohibited.
Cached Saved on: Wednesday 25th of January 2023 05:43:19 PMCached Disp on: Monday 6th of February 2023 04:46:27 AM