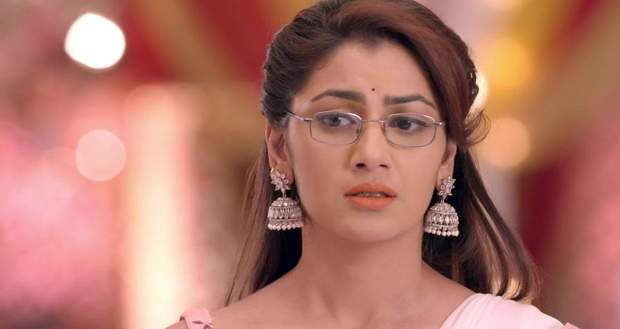 Today's Kumkum Bhagya 5 February 2021 episode starts with Pragya feeling uneasy that her Sindoor is removed while Abhi assures her that he will apply it again after reaching home.

Abhi calls Purab who tells him to come home soon as Rhea is tensed as Ranbir joked about him being in danger.

Abhi takes the number from him and calls the old man.

The uncle asks them about their location while Pragya tells Abhi that someone else is with the old man who wants to know their location.

Abhi tells them the location while the old man voices another location and cuts the call.

It is shown that the shooter has his gun aimed at the old man while a flashback shows the same shooter vowing to kill Abhi and Pragya before sunrise and killing himself if he fails to do so. The flashback ends.

The shooter is about to kill the old couple when Abhi calls the old man's phone and tells shooter their actual location in exchange for freeing the old couple.

Abhi notices a temple and tells Pragya that her wish of getting her hairline filled will be fulfilled and goes there and will Saritha and Baljeet feel uneasy seeing the Diya blown off.

Abhi tells Pragya to forget all her fears and announces that they will marry once again in this temple.

The shooter reaches his jeep and loads his gun while he gets a call from Digvijay but doesn't pick up the call thinking he will call him after killing Abhi to give him the good.

Meanwhile, Digvijay gets a call informing him of the other shooter's arrest and gets angry.

Elsewhere, Abhi and Pragya take their rounds and makes her promise to never leave him even if he says so while Pragya makes him promise the same.