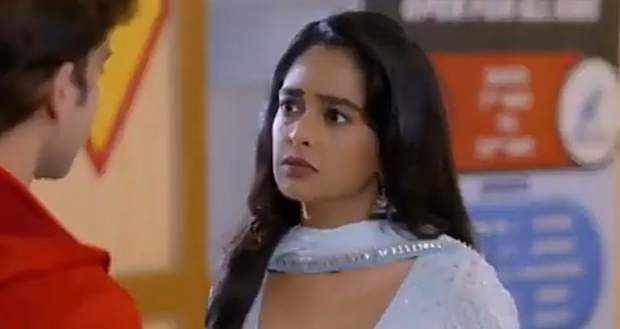 Meanwhile, Abhi talks to the doll of Pragya about going to shopping.

Rhea is about to go to Abhi but Aaliya drags her away and tells her to not ask Abhi to stop the marriage.

However, Rhea stays adamant on her decision and goes while Aliya tries to threaten her that she will not help her.

Abhi and Pragya are on a call while he invites her to his Haldi ceremony.

Purab confronts Abhi while Rhea comes there and asks Abhi to stop the wedding.

Elsewhere, Prachi breaks up with Ranbir but he thinks that it is a joke. Prachi tells him that she loves money more than him and leaves.

Abhi refuses to break his marriage with Meera when Rhea tells him that she will run away from home. Abhi tells her that she will face his wrath if she does such a thing and leaves.

Pleased with the outcome, Aaliya believes that Rhea is no longer use of her.

Elsewhere, Ranbir tells Prachi that he will make money for her but she says that he is no longer use of her and that she needs to trap another boy.

Ranbir feels hurt by her words ans says that Rhea was right about her and leaves.

Suhana gets worried for Prachi and Ranbir while Aaryan says that they might be talking.

They see Ranbir coming out angry and Suhana asks him what's wrong.

Ranbir tells her that Prachi wants to break up with him and storms away.

Later, Prachi tells Suhana the truth while Ranbir wants out his frustration at Aaryan.