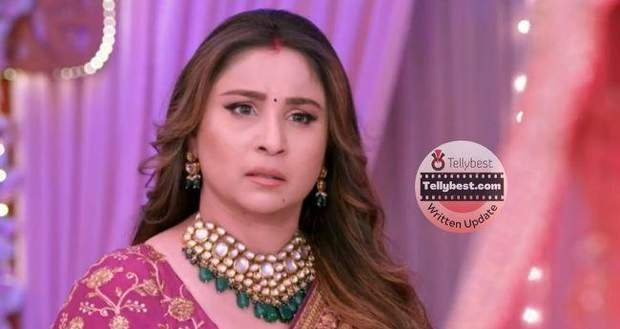 At Prachi’s request, Ranbir tells Rhea to come out of the room which Rhea refuses and says that she wants to die.

Ranbir counts to 5 and asks Rhea to come out within that time which works out perfectly and Rhea comes out in an instant.

Prachi hugs Rhea in relief seeing her fine but Rhea pushes her away and clings to Ranbir saying that he saved her life.

Ranbir stares at Prachi with a disappointed look and separates Rhea from himself.

Rhea tells Ranbir that she was sure that he would help her to survive as he loves her from the bottom of his heart.

Ranbir silently heads into Rhea’s room while Rhea stops Prachi from entering saying that she has some private talk to do with her husband.

Rhea tells Prachi that she would be much happier if Prachi did not exist in her life which upsets Prachi and she walks away from there.

However, Rhea notices Ranbir packing her clothes in a suitcase and tries to take it away but Ranbir throws Rhea’s bag in the living room along with her.

As Prachi tries to help Rhea, she pushes away Prachi but Ranbir catches her at the right time and asks Rhea how dare she touch Prachi.

Prachi still tries to protect Rhea but Ranbir asks her to stop and tells everyone that Prachi has so much love for Rhea despite her personality.

Rhea tells Ranbir that she does not want to hear about Prachi but about his feelings regarding her and their relationship.

As Ranbir says that he does not love Rhea, Rhea says that he is lying and they were the most famous couple in the college.

Rhea asks Ranbir if he loved her in the past and asks him to tell the truth after placing his hand on his baby.

Ranbir accepts that he loved Rhea in the past but clearly states that after falling in love with Prachi, he does not have any feelings toward her.

As Rhea says that Prachi snatched him away from her, Ranbir tells Rhea that even if Prachi was not there, he would not have married Rhea as she is an impure and corrupted soul.

Ranbir commands Rhea to get out of his house and never come back, which Rhea silently obeys and leaves.

Later, Sahana and Aryan plan a surprise for Ranbir and Prachi and ask them to come to their room after changing their clothes.

After both Ranbir and Prachi come, Aryan and Sahana show their surprise which is a romantic dinner planned for them inside their room.

Ranbir and Prachi are made to sit at the decorated table after which he sends Sahana and Aryan out of the room.

Coming closer to Prachi, Ranbir tells her that she has everything that she wanted and they should start their new life on a happy note.

Planting a gentle kiss on Prachi’s hand, Ranbir sensually initiates a dance with Prachi while maintaining eye contact with each other.

Rhea comes to Alia and tells her about her leaving that house after everyone insulted her.

Seeing Rhea’s condition, Alia determines that she will revert to the actions of the entire Kohli family.