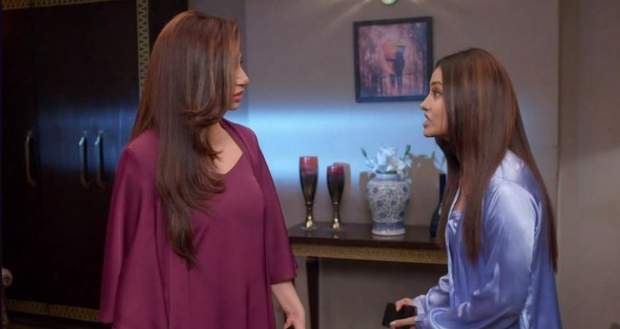 Today's Kumkum Bhagya 5th July 2022 episode starts with Pallavi telling Ranbir to be with Rhea by her side as she might require something in the middle of the night.

Ranbir tries to protest but gets forced to go back by Pallavi.

Meanwhile, Dida comforts Prachi as she cries her heart out.

Prachi says that she will stay till Pallavi’s birthday but staying in that house spikes memories that she wants to get rid of.

Dida folds her hands together and apologizes to Prachi on Ranbir’s behalf as he betrayed Prachi so badly.

Seeing Dida feeling so guilty, Prachi becomes a bit emotional and shares a tight hug with her while Sahana appears in the room.

Sahana asks both Prachi and Dida to stop crying as they are making her emotional.

On seeing Dida talk about Prachi’s baby, Sahana gets a bit shocked but relaxes when Prachi tells them that Dida is aware of the truth.

Sahana expresses her happiness by smiling as there are two persons in the house who will take care of Prachi during her pregnancy.

The next morning, Vikram announces to Pallavi and Ranbir that he has finalized his dream project which is to build a small village in Delhi City.

Just then, Stanley comes with some files and Ranbir takes off to the study room along with Stanley.

As Stanley asks about the situation of Ranbir’s married life, Ranbir reveals the mess that is going on regarding Rhea’s pregnancy and tells him how Prachi is on the verge of leaving the house.

However, Ranbir tells Stanley that he has made the decision of staying with Prachi for the rest of his life.

In order to do so, Ranbir plans to ruin Vikram’s dream project so that he has a fight with him and gets thrown out of the house.

Stanley asks Ranbir to think twice about his plan but Ranbir assures him that he will convince Vikram later.

After figuring out the plan to get out of the house, Ranbir begins to jump around in joy and nearly stumbles on his steps.

However, Prachi catches Ranbir at the end moment and saves him from falling to the floor.

Ranbir holds onto Prachi’s hand and tells that he will not let her go that easily.

Later, Dida points out to Pallavi that Prachi is the one who is arranging her birthday party instead of Rhea and suggests her to open her eyes.

© Copyright tellybest.com, 2022, 2023. All Rights Reserved. Unauthorized use and/or duplication of any material from tellybest.com without written permission is strictly prohibited.
Cached Saved on: Wednesday 25th of January 2023 10:01:20 AMCached Disp on: Thursday 9th of February 2023 07:56:23 AM