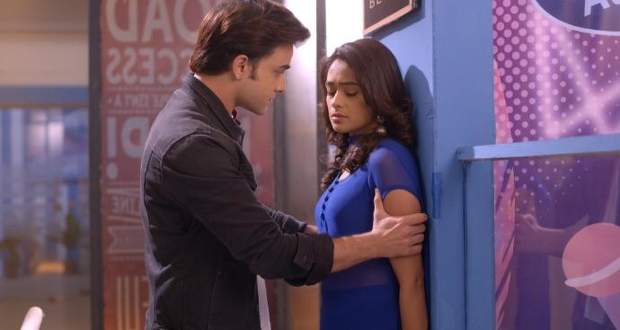 Today's Kumkum Bhagya 5 March 2021 episode starts with Palak informing Ranbir that she told Prachi about his plan by mistake.

Meanwhile, Prachi comes in search of Ranbir and starts to yell at him for making a plan to marry her by cheating.

So Ranbir tries to make Prachi understand that he is not having any bad intentions for her and he professes his love to Prachi.

Prachi is about to get convinced by his words but soon she remembers her promise to Rhea and leaves from there.

On the other hand, Pragya returns home and locks herself in the room.

Sarita aunty somehow gets into the room and sees Pragya crying badly.

Further, Sarita aunty notices the bite on Pragya’s hand and gets worried.

Pragya explains the condition of Abhi and how Aliya beats him to control him.

Sarita aunty tells Pragya to continue the job of the maid so that she can know the exact state of Abhi from the doctor and she can even take care of him.

Ranbir is in a rage as Prachi rejected his proposal in front of everyone.

Later, Ranbir tells his friend that he is going to take revenge on Prachi for rejecting him.

© Copyright tellybest.com, 2020, 2021. All Rights Reserved. Unauthorized use and/or duplication of any material from tellybest.com without written permission is strictly prohibited.
Cached Saved on: Monday 19th of April 2021 11:29:16 AM