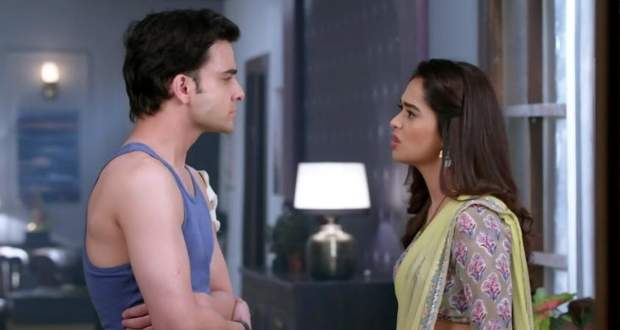 Today's Kumkum Bhagya 5th May 2022 episode starts with Alia escorting Rhea to the sofa and shouting for Prachi in anger.

Alia bursts with fake concern for Rhea as she checks up on her non-existent wounds and declares that Rhea might have broken her wrist.

Continuing her drama, Alia suddenly acts to catch up on the fact that it is Prachi who initiated all of these to kill Rhea.

Ranbir and others remain stunned at hearing Alia’s allegations and try to calm her down and think rationally.

However, Alia reminds everyone about the warehouse incident and how Nick took Prachi’s name as the culprit who hired him.

Based on that, Alia declares that Prachi is continuing her plan of initiating attacks on Rhea so that she can kill her.

Ranbir straightaway denies the allegation on Prachi and asks Alia not to draw conclusions in such a hasty manner.

Alia turns to Pallavi and reminds her of breakfast time when she told her about Rhea’s habit of standing on balconies in front of Prachi.

Hearing that, Pallavi concludes in her mind that Alia is right and it is Prachi who messed up with the railing to kill Rhea.

Although Ranbir somehow manages to stop Alia from calling the police, Pallavi calls them and accuses Prachi of planning Rhea’s murder.

Sahana comes and stands in defense of Prachi stressing the fact that they always blame everything that happens to Rhea on Prachi.

Meanwhile, the police arrive and ask to see the balcony after hearing the whole story.

As the police investigate the balcony, Prachi appears and gets shocked to be accused of trying to kill Rhea.

The police officer informs that someone has intentionally loosened all the bolts of the railing so that it falls whenever someone puts pressure on it.

The police ask Prachi to show her room as they want to check for evidence to which Prachi gladly agrees and shows them the way.