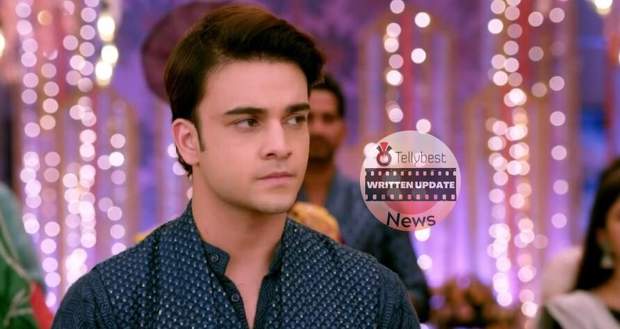 Today's Kumkum Bhagya 5th September 2022 episode starts with Siddharth asking Pallavi and Vikram to think over their decision once more as many lives are going to change after the marriage.

Pallavi says that Siddharth should have thought a second time before having an extramarital affair with Prachi.

Before Siddharth can say anything more, Vikram asks him to be silent as he is the one in wrong.

Vikram expresses his frustration over his children’s careless behavior which just makes a fool out of the elders.

Grabbing Siddharth by his collar, Vikram tells him that if he was his own son, then he should have slapped him several times.

Pallavi announces that her decision is final as Prachi’s child cannot be born as an illegitimate child and needs to have a father.

Alia adds salt to the wound by reminding everyone how Prachi was trying to fool everyone by telling them that she was pregnant with Ranbir’s child.

Meanwhile, Rahul and Priya (the servants Alia fired the other day) talk about how Alia humiliated them and Rahul decides to take revenge.

Rahul calls his friends and plans to steal Alia’s necklace for which he and Priya were blamed.

Coming back, Prachi hears Ranbir telling Siddharth that he should marry Prachi and carry his responsibility of being the father of Prachi’s child.

Prachi strongly denies marrying Siddharth after she hears that Pallavi wants the marriage to be over by next week.

However, Pallavi says that they are not requesting Prachi but commanding that the marriage has to take place accordingly.

After everyone leaves the room, Prachi falls to her knees and cries while Sahana tries to comfort her.

Siddharth comes to talk to Ranbir but gets pushed off by him. Aryan suggests Siddharth to not bug Ranbir as he can become violent.

Ranbir tells Aryan how everything that is happening is hurting him immensely, leaving him with intense heartache.

Rhea comes and takes Ranbir to the dance floor while Alia plays a romantic song to set the mood.

However, Ranbir imagines Prachi in place of Rhea and dances with her with sensual moves from his side.

Prachi gets hurt on seeing Ranbir seeing so close to Rhea and leaves as soon as she makes eye contact with Ranbir.

In the meantime, Rahul and his friends reach the Kohli mansion and make a plan to get inside to steal the necklace.

Prachi bumps into a pillar while walking and sees a part of the decoration falling on the floor.

As Ranbir spots Prachi trying to fix the thing while climbing on a stool, he asks Prachi to come down as she can get hurt.