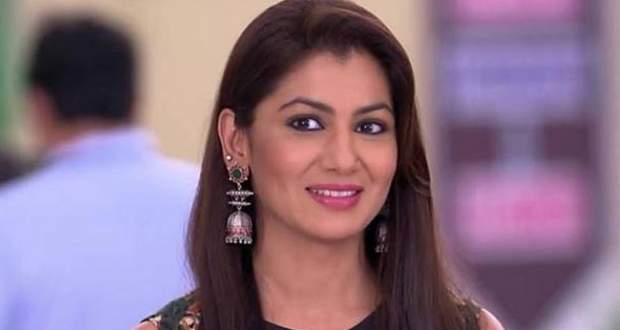 Today's Kumkum Bhagya 6 April 2021 episode starts with Pandit Ji telling that the marriage cannot happen ad the Mandap is ruined while Tanu says that they will get married and bribes Abhi to say yes for chocolate.

Abhi insists to changes his clothes or else he will not marry after which Tanu tells Aaliya to get him changed.

Ranbir insists Pragya stop marriage while Abhi says that he will marry Tanu and will get chocolates, toys etc.

Pragya collides with Aaliya as she is going to stop Rhea from going near the fridge.

Aaliya brings Abhi to the Mandap while Pragya and Ranbir reach the electricity meter room.

Ranbir takes out the fuse but the light is still there while Mitali hears a noise coming from the meter room.

Mitali thinks that a thief has come amd faints while Ranbir cuts the wire and the lights go off.

Abhi gets scared while Tanu goes to do a touch up of her make up.

Vikram says that there is light in his house and suggests that there might be a short circuit.

Pragya and Ranbir scare Mitali and manages to rush away from there.

Rhea talks to Abhi while Mitali goes to Aaliya and says Pragya's name but Aaliya brushes her off and orders her to bring Mangalsutra.

Pandit Ji says that 30 minutes are left for Mahurat while Aaliya insists the Judge stay.

Electricity comes back while Ranbir tells Pragya to stop Aaliya from going to the room and goes into the room.

Pragya tells Aaliaya to stop the marriage or else she will go to jail while Aaliaya asks her to show her face.

Tanu tells Aaliya that Gayatri is actually Pragua while Pragya notices the killer looking at her and Abhi.

© Copyright tellybest.com, 2020, 2021. All Rights Reserved. Unauthorized use and/or duplication of any material from tellybest.com without written permission is strictly prohibited.
Cached Saved on: Friday 16th of April 2021 11:22:33 PM