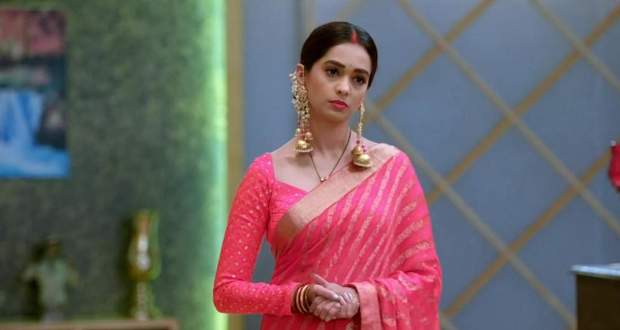 Today's Kumkum Bhagya 6th April 2022 episode starts with Rhea getting furious about not getting the rightful place she wanted, to sit with Ranbeer even after Pallavi's orders.

Prachi says a crow cannot look like a peacock even if the crow sticks a feather on it.

Meanwhile, Pallavi tries to help but Prachi stands strong and warns Pallavi as she doesn't want to be disrespectful.

On the other hand, Ranbeer is asked to get up from the Puja but decides not to, and is supported by Vikram.

Ranbeer says everyone can do whatever they feel like and leave Prachi and him alone, pointing towards Rhea while Rhea feels embarrassed.

Aliyah plans with Nick to cut the rope of the chandelier and harm Prachi.

As Nick is cutting the rope, Aliyah looks at Prachi with hate and waits for her plan to be fulfilled.

After the Puja is completed, Ranbeer takes the aarti towards Pallavi while she refuses to accept it.

Meanwhile, Prachi arrives and requests her to take the aarti as it is considered to fulfill all the wishes.

Pallavi accepts the aarti and wishes Prachi and Ranbeer's separation while the family members are shocked.

Later, Pallavi expresses her anger towards Vikram and Dida.

Fall of the chandelier

Aliyah waits for the chandelier to fall while Sahana asks her what is she looking at.

As soon as Sahana leaves, Alia cuts the last string of the chandelier.

Alia and Rhea feel defeated again while the family members are in shock.

Sahana informs Ranbeer that someone has cut the rope and Ranbeer follows Nick.

As soon as Ranbeer is about to catch Nick, Aliyah saves Nick from getting caught.

Nick reveals that he accidentally told some part of the truth to Ranbeer that the chandelier scandal was done intentionally and not by accident.

Meanwhile, Ranbeer arrives with the police to ensure extra safety for Prachi and files a case of an attempt to murder.