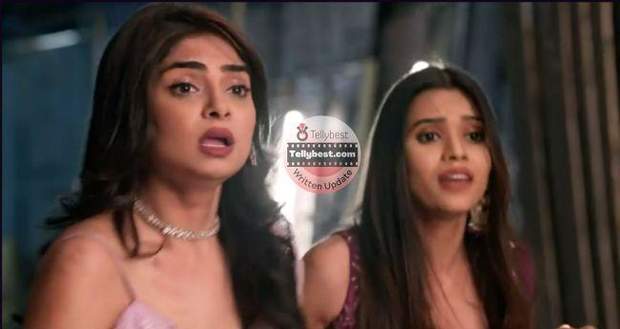 The nurse refuses to let Prachi get near Ranbir while the doctor asks her to go outside at once as she is hindering the treatment.

Prachi asks the doctor to tell her once how Ranbir is doing and she will leave that room without causing any commotion.

The doctor and nurse continuously ask Prachi to get out of the room but Prachi says that Ranbir needs her and she will just sit while holding onto his hand.

At last, the doctor asks the nurse to let go of Prachi and she comes and holds Ranbir’s hands asking him to open his eyes.

Prachi says their baby is waiting for their father to wake up as their heartbeat is connected.

Suddenly, Ranbir’s heartbeat stabilizes which shocks the nurse and she tells the doctor that Prachi’s touch saved Ranbir’s life.

The doctor asks the nurse to shut up as Ranbir’s condition is getting better because of the injection.

Prachi comes out of the room and tells Sahana, Sid, and Mihika that Ranbir is fine now.

Sahana makes Prachi sit while Sid goes to bring water for her. Prachi tells Sahana that she has been very cruel toward Ranbir and never acknowledged his love for her.

Prachi remembers an incident from the past where Ranbir tells her that their love is a bit different as it is connected by their souls instead of their hearts.

Prachi smiles after remembering Ranbir’s words and says that now three souls are connected through the bond of love.

Meanwhile, Rhea asks Aryan to speed up the car while Alia asks her to calm down for a minute.

The car stops in the middle of the road and Aryan comes outside to check the engine along with Rhea and Alia.

As Aryan looks at the engine, Alia and Rhea go aside and have a discussion by themselves.

Rhea tells Alia that she will not spare her if anything happens to Ranbir which angers Alia to a certain extent.

Coming back to the hospital, Prachi remembers another past incident where she explained to Ranbir the importance of mangalsutra.

While having a tussle with Sahana, Prachi’s mangalsutra breaks off and falls to the ground.

Prachi hurriedly joins the beads and puts back her mangalsutra but hears a commotion from inside Ranbir’s room.

The doctor comes out and asks a ward boy to call the senior doctor as Ranbir is not responding anymore.

Prachi gets nervous and asks the doctor to let her in but the doctor refuses to do so.

© Copyright tellybest.com, 2022, 2023. All Rights Reserved. Unauthorized use and/or duplication of any material from tellybest.com without written permission is strictly prohibited.
Cached Saved on: Wednesday 25th of January 2023 11:37:43 AMCached Disp on: Monday 6th of February 2023 01:41:32 AM