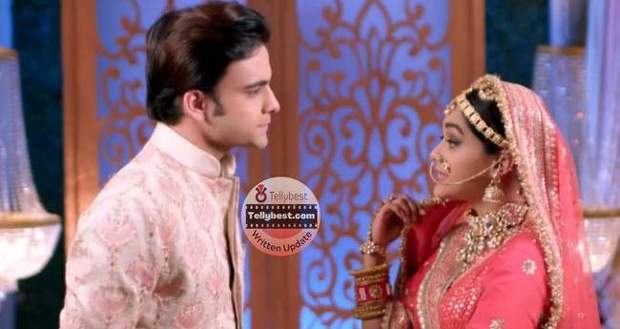 Today's Kumkum Bhagya 6th January 2023 episode starts with Ranbir and Prachi getting close to each other when suddenly Prachi holds onto her stomach and crutches down.

Ranbir asks Prachi what the matter is and panics about seeing her in pain.

Prachi tells Ranbir that her stomach is paining a lot and asks him to take her to the hospital immediately.

Ranbir asks Prachi to breathe slowly while he calls Aryan and Sahana to come quickly as they need to take Prachi to the doctor.

Sahana and Aryan come running and help Ranbir to lift up Prachi in his arms and take her to the hospital.

Meanwhile, Alia calls a lawyer and asks him to suggest a plan to her with which she can destroy the entire Kohli family.

The lawyer says that they cannot do anything unless Rhea lodges a complaint against Ranbir and his family.

Alia tells the lawyer that she wants a case made without disturbing Rhea as she is in a broken state after getting hurt by Ranbir.

The lawyer says that if Rhea does not file the complaint herself, then it will be a weak case with no base.

Alia asks the lawyer to get out of her house and decides to snap Rhea out of it as she needs to step up in the game.

At the same time, the doctor checks on Prachi and informs Ranbir that it was a false alarm due to an anxiety attack.

However, the doctor asks Ranbir to take care of his wife and child to which Ranbir promises to be on their service always.

Pallavi and others scold Ranbir for not informing them about Prachi after they return from the hospital.

Pallavi asks Prachi how she is feeling and hugs her while asking her to take care of herself and her child.

Pallavi announces that she wants everyone to clearly know that Prachi is their one and only daughter-in-law and has planned a reception party for Ranbir and Prachi.

The next day, Pallavi gets busy with the reception arrangements and asks Priya to distribute the remaining invitation cards.

Alia comes and takes away one card with herself without showing herself to anyone.

Pallavi notices Prachi adjusting the food according to her tastes and realizes how she always judged Prachi wrong.

Pulling Prachi close to her heart, Pallavi tells her that she became late to realize Prachi’s worth and plants a kiss on her forehead.

Prachi gets emotional as Pallavi’s love reminds her of Pragya who is no longer with her.

Coming to their bedroom, Prachi helps Ranbir in finding his jacket and tells him about his carelessness.

Ranbir says that he is lucky to have her by his side and kisses Prachi on her forehead gently.

At the same time, Alia shows Rhea the invitation card and tells her that it is time that she takes revenge on them for her pain.

Pallavi and Dida do arti of Prachi and tie a black thread around her wrist to protect Prachi from evils.

Just then, Alia enters the house confidently leaving everyone in the family shocked.

© Copyright tellybest.com, 2022, 2023. All Rights Reserved. Unauthorized use and/or duplication of any material from tellybest.com without written permission is strictly prohibited.
Cached Saved on: Wednesday 25th of January 2023 09:56:49 AMCached Disp on: Monday 6th of February 2023 04:25:57 AM