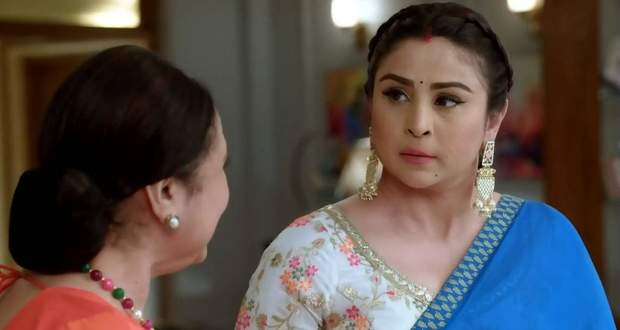 Today's Kumkum Bhagya 6th July 2022 episode starts with Alia and Rhea discussing something by themselves and noticing Stanley standing in the corridor.

Rhea starts to insult Stanley and tells Alia that she is sure Stanley is not a good person.

Stanley tries to defend himself politely but gets overpowered by Rhea and Alia warning him in unison.

Just then, Ranbir comes and tells Rhea and Alia that insulting Stanley means they are indirectly insulting him as Stanley is his personal assistant.

Ranbir leaves with Stanley while Rhea groans in frustration as to why Ranbir is taking the side of an employee over her.

Meanwhile, Prachi gets busy with the decorations for Pallavi’s birthday when Ranbir and Stanley enter the living room.

Stanley suggests Ranbir keep Sahana away from Prachi while Sahana also complains about Stanley being a strange guy.

On seeing Prachi about to move a heavy object by herself, Ranbir rushes to offer help but Prachi stops him midway.

Prachi announces that she does not need any help from Ranbir and leaves when Ranbir refuses to back off.

Ranbir and Stanley move the object together with Ranbir’s eyes fixed on Prachi.

Prachi notices Ranbir staring at her and asks Ranbir to stop doing that because she feels uncomfortable.

Meanwhile, Pallavi and Vikram have a conversation that Rhea eavesdrops on while standing outside the room.

Pallavi tells Vikram that Prachi is not as bad as she thought her to be which makes Vikram happy.

Pointing out that Prachi has to leave the house once the party is over, Pallavi compliments Prachi’s efforts in making her birthday special.

However, Rhea fumes in anger on hearing Pallavi’s comment and desperately searches for Alia to release her anger.

Rhea shouts at Alia in anger and blames her for suggesting Rhea beg in front of Prachi.

After calling Alia a failure and pathetic, Rhea tells her that she will solve her issue by herself and leaves.

In the meantime, Ranbir and Prachi collide with each other while the basket of flowers falls, raining flowers over them.

Prachi almost trips but gets caught by Ranbir who asks her to be careful.

However, Prachi acts coldly and asks Ranbir to take care of his pregnant wife instead of roaming there.

On the other hand, Alia figures out that it is Dida who stopped Prachi from leaving and thinks of a plan to counterattack.