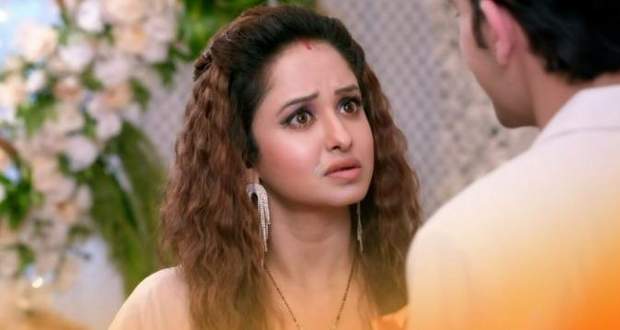 Today's Kumkum Bhagya 6th June 2022 episode starts with Rhea being happy while thinking that Ranbir is going to propose to her.

Ranbir and Rhea spot each other and decide to talk with each other but different things.

Rhea thinks of asking Ranbir about the ring while Ranbir decides to talk about the divorce to Rhea.

As Rhea tells Ranbir that she has to ask something of him, Ranbir allows Rhea to go first.

Rhea asks Ranbir her ring size and gets happy when he answers the correct measurement.

Without listening to Ranbir, Rhea walks away while beaming with excitement.

Later, Ranbir bumps into Alia who tells him that she supports him with what he has planned to do today.

Ranbir gets confused on hearing Alia but believes her words when Alia tells him that she knows about the incident at the hospital.

Without catching that Alia is talking about Rhea, Ranbir tells her that he will clear out all things by that day only.

Stanley arrives with the divorce papers and gets welcomed by Ranbir.

Pallavi asks Ranbir to welcome Stanley inside and let him enjoy the party.

After coming inside, Stanley tells Ranbir that Rhea will not give him a divorce at any cost.

However, Ranbir still goes up to Rhea and tells her that he has something to discuss with her.

Ranbir tells Rhea that he loves Prachi adamantly which helps him to see things precisely in life, he wishes to always protect Prachi and make her happy.

Hearing this, Rhea gets irritated and asks Ranbir why he is talking about Prachi.

Ranbir hesitantly reveals the divorce papers and tells Rhea that he wants to divorce her as there is no love between them.

Rhea shouts in agony and causes a scene in the middle of the party as she announces Ranbir’s decision to get a divorce.

As Rhea tries to blame Ranbir for using her, Ranbir reminds Rhea of how she blackmailed him by telling him that she will kill herself if he does not marry her.

Rhea grabs Prachi and announces that it is Prachi’s plan to manipulate Ranbir into doing this thing.

Ranbir catches Prachi as Rhea tries to push her on the floor and shuts Rhea up.

Ranbir declares that Prachi is his real wife who is going to be the mother of his child.

For the security and protection of his family, Ranbir announces that he will leave the house with Prachi.

Rhea comes with a knife and shoves it straight into Prachi’s stomach making everyone gasp in shock.

© Copyright tellybest.com, 2022, 2023. All Rights Reserved. Unauthorized use and/or duplication of any material from tellybest.com without written permission is strictly prohibited.
Cached Saved on: Wednesday 25th of January 2023 03:05:54 PMCached Disp on: Sunday 5th of February 2023 01:00:51 PM