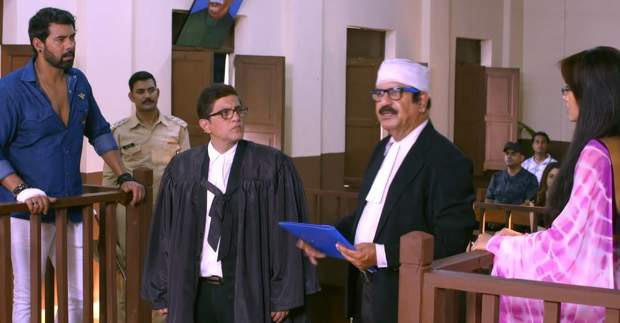 Today's Kumkum Bhagya 6 May 2021 episode starts with Mr. Singhania telling the judge that Pragya and Abhi are not even married and showing the divorce papers.

He accuses Pragya of lying in court when suddenly Raghuveer arrives there and shocks everyone.

After Raghuveer explains that he was attacked by goons and a doctor saved him, Mr. Singhania shows everyone a video in which Abhi is tackling Tanu.

Further, Mr. Singhania shows the DNA reports which clarify that there was Abhi's DNA on Tanu's garments.

Raghuveer brings in Abhi's medical reports that he was unable to rape in his child syndrome and bring in the doctor to testify.

However, Mr. Singhania manages to overpower in the verbal battle and the judge announces Abhi as guilty.

Raghuveer requests the judges to give him some time to prove Abhi's innocence and give him bail which Judge approves.

The judge announces that the next hearing is after three days and everyone leaves the courtroom.

Pragya receives a call from the security guard informing her that there is a fire in Mehra mansion and she decides to stay in the farmhouse with her family till then.