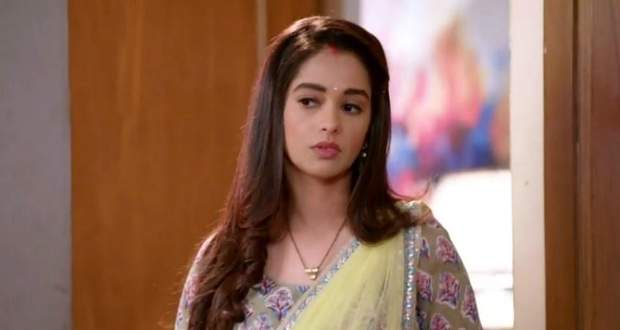 Today's Kumkum Bhagya 6th May 2022 episode starts with Pallavi asking Vikram to open his eyes and try to see Prachi’s true colors through this incident.

The police carry out their search in Prachi’s room while everyone gathers around to see what happens.

Sahana tells everyone that the police will not get anything in Prachi’s room as she has done nothing wrong.

Just then, the police find out the bag with tools inside it from Prachi’s cupboard.

A flashback shows Alia sneaking out of the crowd and placing the bag in Prachi’s cupboard to direct suspicion toward her.

The police officer concludes that Prachi might have messed with the railing with those tools as they were hidden like that in the cupboard.

Prachi strongly denies doing something like that with Sahana also speaking up for her.

However, Rhea interrupts in between and pounces on Prachi with her verbal insults to prove that she is the only one who can do so.

Prachi’s eyes stare at Ranbir as Rhea demands that she wants officially lodge an FIR against Prachi for trying to kill her continuously 2 times.

Ranbir interrupts the police officer and asks him not to draw a conclusion based on Rhea’s words as she has personal problems with Prachi.

Ranbir announces that Prachi can never cause harm to Rhea even if they are sworn enemies which makes Prachi a bit happy.

The police ask Ranbir, Rhea, and Prachi to come to the police station with them.

After they reach the police station, Rhea acts like a patient and clings to Ranbir through the excuse of her wrist pain.

As Ranbir goes to fetch a doctor, Rhea shames Prachi for being so shameless and adamant in coming between her and Ranbir.

Ranbir comes and takes Rhea with him while Prachi stands alone with an upset face.

The doctor checks Rhea while Alia drives Ranbir out by coming at the right moment as Rhea is injured in reality.

Later, the police officer tells them that it is not certain that Prachi is the culprit.

On hearing this, Rhea bursts into anger and demands Prachi be arrested then and there.