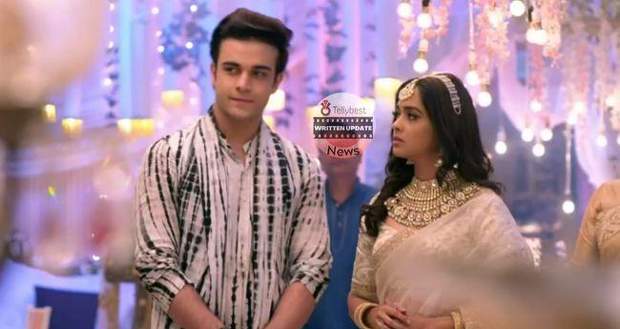 Today's Kumkum Bhagya 6th October 2022 episode starts with Prachi staring at Ranbir laughing with the guests and wondering why he is so happy even though the engagement was done between her and Sid.

Ranbir asks all the guests to congratulate him and thank everyone, while Prachi approaches him.

Seeing Prachi, Ranbir hugs her while congratulating her for her engagement with a happy smile confusing Prachi even more.

Prachi asks Ranbir why he is the one getting congratulated when the engagement was between her and Sid.

Ranbir laughs it off and says it does not matter whether he or she gets the congratulatory wishes.

As Ranbir asks Prachi to congratulate him, Prachi makes a sour face and walks away bumping into Sahana.

Sahana tells Prachi that she found an interesting thing in Alia’s room which changes Prachi’s expression as they head inside.

Ranbir notices Sahana and Prachi leaving with serious faces and wonders what the matter is.

After gathering in Sid’s room, Sahana asks Prachi and Sid to show some excitement for the clue that is to be revealed by her.

Sahana reveals that she found a card from the Orchid Star Hotel in Alia’s room which interests both Prachi and Sid.

Just then, Ranbir comes into the room and Prachi asks Sahana to be silent as they cannot let Ranbir know the truth.

Ranbir asks the three of them about what they are talking about to which Prachi asks him if he will take their side over Rhea.

Ranbir says it is an obvious question but Prachi does not seem amazed by his answer and leaves the room followed by Sid and Sahana.

Meanwhile, Rhea comes to Priya in the kitchen and orders her to bring a bowl of papayas to her room within 20 minutes.

Priya warns Rhea that she cannot eat papaya during pregnancy but Rhea tells her to mind her own business.

On her way to deliver the papayas, Priya bumps into Prachi who asks her to not give those to Rhea and return home.

Prachi begins to think why Rhea would order something like papaya when she knows they are harmful to her pregnancy.

Later at night, Prachi discusses the matter with Sahana as the thought of Rhea trying to abort her child comes to her mind.

The next morning, Ranbir raises a toast with juice along with all the family members at breakfast as he wants to celebrate his happiness.

Siddharth asks Alia to let him meet Mihika while Prachi also informs everyone that she and Sahana have to go to Sarita aunt’s house.

Ranbir proposes to drop off Prachi but she declines his offer which leaves him sulking.

© Copyright tellybest.com, 2022, 2023. All Rights Reserved. Unauthorized use and/or duplication of any material from tellybest.com without written permission is strictly prohibited.
Cached Saved on: Monday 21st of November 2022 06:59:39 AMCached Disp on: Wednesday 7th of December 2022 02:51:08 PM