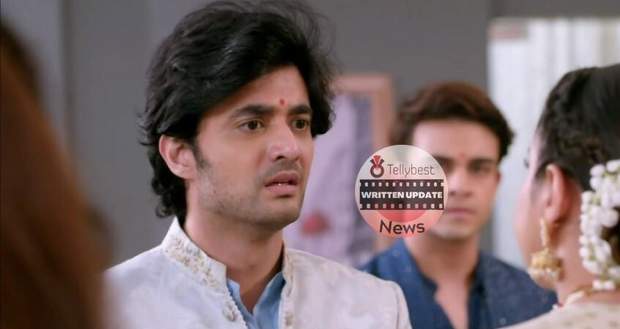 Today's Kumkum Bhagya 6th September 2022 episode starts with Prachi asking Ranbir to state everything he thinks to be dangerous for Prachi except standing on a stool.

Prachi sarcastically comments that Ranbir is the one who is taking all her decisions regarding her life.

Hearing Prachi, Ranbir says that if she had trusted him one bit in the past, their relationship would not turn out like that.

Saying that Ranbir leaves behind Prachi and cries after coming to his room.

However, Prachi comes after him and asks him the meaning of his words.

Ranbir says that he loves Prachi more than he can imagine himself and his heart will continue to love her until his last breath.

Even though everyone around him and his brain turn against Prachi, Ranbir cannot help but love her unconditionally.

Ranbir caresses Prachi’s cheek and tells her that if she would have told him about her pregnancy earlier then he would have accepted both her and her child with open arms.

Prachi asks Ranbir if he has already made up his mind that Prachi’s child belongs to Siddharth.

Ranbir says that he has no right to make decisions as Prachi has snatched that right from him but he advises her to do the right thing.

As Ranbir leaves, Prachi follows him and calls his name which makes Ranbir shed tears of heartbreak.

With their eyes doing all the talk, Prachi and Ranbir communicate with each other with Prachi asking Ranbir if he really wants her to marry Siddharth.

Ranbir answers in his heart that he never wants to see Prachi with anyone else but it is the right thing to do for her child.

Meanwhile, Siddharth feels suffocated with guilt for ruining Ranbir and Prachi’s life and rushes to Pallavi to tell her the truth.

However, Alia comes and takes Siddharth with him before he can spill any information in front of Pallavi.

Alia and Rhea threaten Siddharth with a knife and say that they can stage his death as a suicide due to feeling overly guilty.

Siddharth asks Rhea and Alia to stop their plan and plotting as their games are destroying the lives of others.

Just then, Pallavi enters the room and Siddharth tries to tell her about his sister but Alia and Rhea distract Pallavi.

After Siddharth leaves, Rhea tells Alia that Siddharth is becoming a threat but Alia assures her that she will handle things.

Rahul and his friends enter the house in disguise and plan to steal both Alia and Rhea’s jewelry.

Meanwhile, Sahana tells Aryan that they are the only ones who can help Ranbir and Prachi in the current situation.

Sahana suggests Aryan talk with Ranbir and finds out what his heart wants to which Aryan agrees.

© Copyright tellybest.com, 2020, 2021. All Rights Reserved. Unauthorized use and/or duplication of any material from tellybest.com without written permission is strictly prohibited.
Cached Saved on: Sunday 2nd of October 2022 08:34:28 AMCached Disp on: Wednesday 5th of October 2022 06:45:24 PM