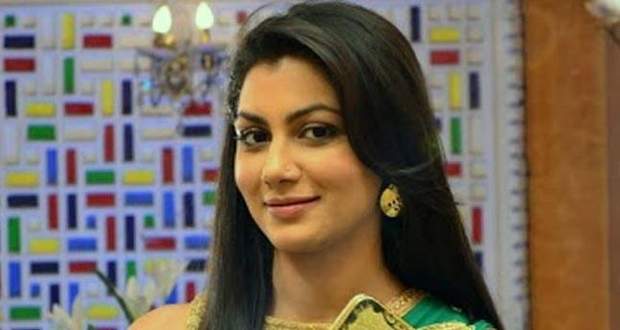 Today's Kumkum Bhagya 7 April 2021 episode starts with Tanu getting ready for the wedding while wondering why Aaliya didn't come to take her and thinks to go out herself.

However, Ranbir comes there and tells her that Aaliya is coming and compliments her.

He mixes sleeping in her glass of water when she isn't looking and makes her drink the water.

Aaliya demands Gayatri to lift her veil while Pragya declines fearing that her secret might be revealed.

Pragya manages to blackmail her into not firing her as only she can control Abhi.

Ranbir comes downstairs and informs Pragya of his plan.

Aaliya enters Tanu's room and thinks that she is drunk while Tanu tries to tell her that she didn't drink anything but fails.

Aaliya forcefully makes her stand up and says that she called a lawyer to be a witness of the wedding to get the power of attorney.

She brings Tanu downstairs while Pragya and Ranbir get worried.

Ranbir goes to the meter room to fix it before someone sees it when he accidentally fixes the wire in the wrong circuit and cause a fire that engulfs the whole house.

Ranbir, his father and servants manage to put out the fire.

Aaliya wonders out loud how she can get the power of attorney while the lawyer is standing behind her and gets angry realising her plan.

He destroys the power of attorney papers and leaves while Aaliya tries to stop him but fails.

Tanu is about to fall while Pragya holds her and Tanu recognises that it is Pragya.

Ranbir and Gayatri are speaking while Aaliya comes there and thanks her for taking care of Abhi.

In the morning, Tanu wakes up while Aaliya comes there and starts rebuking her while praising Gayatri when Tanu reveals that Gayatri is none other than Pragya.

Meanwhile, Abhi and Pragya are at an ice cream park where she sees a biker and realises that it is the same one who tried to kill Abhi.