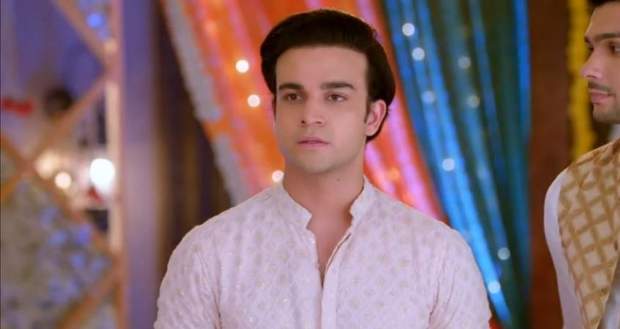 Today's Kumkum Bhagya 7th April 2022 episode starts with Ranbir telling everyone that he had to call the police as someone tried to kill Prachi.

Hearing that Ranbir does not know the truth, Rhea tries to calm him saying they can talk about this later whereas Ranbir insists and tells Rhea that the person has told him everything before leaving.

Meanwhile, Aaliyah questions Nick about telling everything to Ranbir.

Nick tells her that, he only told Ranbir that he is a family member.

Meanwhile, Ranbir asks the guest to cooperate in the investigation as it is a matter of life and death.

Later the police tell Ranbir that the guest seems innocent and now he would like to talk to the family members alone.

During the investigation, Pallavi tells the police that she has no idea who could want Prachi dead.

However, in her anger, Pallavi reveals her dislike for Prachi.

Meanwhile, Prachi comes to Ranbir to give her first aid but Ranbir refuses, whereas Prachi does not care and forces him to administer first aid.

Rhea scolds Prachi for forcing Ranbir while Ranbir asks her to not interfere.

Later, Rhea joins Aaliya and Pallavi and tells the police officer she finds Prachi fake and hates her gut and does not wish to see her alive.

On the other hand, Prachi is giving Ranbir first aid while Ranbir taunts her for curing the pain instead of giving it.

Later, the police inspector tells Ranbir that there is no culprit in the house and they will be looking outside for it.

The police officer tells Ranbir that someone from his family is responsible for the attack and is hiding behind the mask.

Ranbir asks the officer what should he do now.

Police tell him that he should not worry as the culprit will be relaxed now and might try again.

Afterwards, Prachi calls her doctor for a checkup but she tells her that she is going away for two days and can only meet her after.

In the meantime, Shahana comes to Prachi worrying about her while Prachi wants to know why someone would want to kill her.