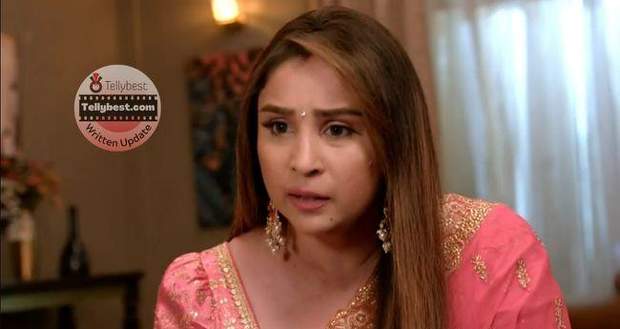 Today's Kumkum Bhagya 7th December 2022 episode starts with Rhea saying sorry to Alia after misbehaving with her and understanding the situation they are in.

Aryan informs that the car is not starting even after he tried and says they might have to search for a lift to get to the hospital.

Rhea breaks down mentally and asks God why he is doing such things with them and asks him to rain over the whole city as that is the only thing left to happen.

Suddenly, a biker passes by on that road and Rhea stops him by coming in front of his bike.

Aryan says that they need help urgently while Rhea asks the biker to give her a lift to the city hospital as she is sick.

Rhea leaves with the biker after Alia asks her to inform her about her arrival.

Meanwhile, the senior doctor comes and enters Ranbir’s room while Prachi and Sahana observe Ranbir’s condition from outside.

Prachi asks Sahana why such a thing is happening to her and Ranbir, and cries while holding onto her mangalsutra.

At the same time, Rhea enters the hospital and asks the receptionist to let her know Ranbir’s room number as she is his wife.

The receptionist asks Rhea not to tell lies as Ranbir’s wife is present with him inside.

Rhea gets infuriated on hearing the receptionist and tries to go inside by force but the security stops her.

The receptionist goes to Prachi and asks her to come out for a moment as a crazy lady is causing a ruckus outside.

Prachi comes to the waiting area and sees Rhea trying to get in while security tries to block her.

Rhea asks Prachi to tell everyone that Rhea is Ranbir’s wife but Prachi refuses Rhea’s claim.

Rhea rages in anger and screams that she is Ranbir Kohli’s wife but Prachi tells her that she and Ranbir are connected by their souls.

Prachi tells Rhea the importance of mangalsutra and says that it is not something she will understand.

While Prachi walks inside, Rhea asks her why she is carrying Sid’s child if she is Ranbir’s wife and calls her baby illegitimate.

Prachi comes back and lands a thrashing slap on Rhea’s face and warns her not to utter anything about her baby.

After Prachi leaves, Rhea starts to throw things but gets stopped by Dida and other family members along with Alia and Aryan.

Rhea goes crazy and tells Pallavi how Prachi insulted her trying to act as a victim.

As the receptionist tells how Rhea was the one who started the scene, Rhea gets abusive toward her and tries to harm her physically.

Pallavi and others ask Rhea to stop but Rhea stops finally after Alia restricts her from harming the staff.

Rhea says sorry to the staff for behaving like that while Pallavi looks at her with a look of dismay.

While entering, Pallavi hears how Ranbir’s heartbeat started again as soon as Prachi held his hands and develops mixed feelings.

© Copyright tellybest.com, 2022, 2023. All Rights Reserved. Unauthorized use and/or duplication of any material from tellybest.com without written permission is strictly prohibited.
Cached Saved on: Wednesday 25th of January 2023 09:37:31 AMCached Disp on: Sunday 5th of February 2023 03:09:04 AM