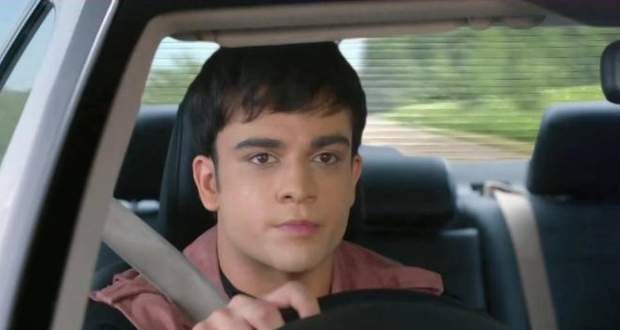 Today's Kumkum Bhagya 7 January 2021 episode starts with Pragya getting down from the car and leaving but her Pallu gets stocks in the car's door.

She imagines confessing her love to Abhi while he opens the door and frees her Pallu.

Meanwhile, Prachi is running out of Mehra mansion while thinking of her break up with Ranbir when she suddenly collides with him and falls into his arms.

He tries to talk to her but she leaves in a taxi while Aaryan tells him to call Shahana.

Pragya reaches home while Dadi hides from her and leaves when she isn't looking.

Rhea is stomping her foot in the kitchen while Aliya comes there and tries to provoke her against Pragya.

Elsewhere, Pallavi tells Vikram that she is worried since Ranbir is not speaking to her properly.

Ranbir comes there and she tries to talk to him but Vikram tells him to go to his room and rest.

Ranbir calls Shahana but doesn't get any response.

He wonders why Prachi came to Mehra mansion gets the suspicion that she broke up with him on Rhea's sayings.

He voices his suspicion to Aaryan and says that something is wrong.

Meanwhile, Purab comes to Abhi and request him to not go forward with the marriage but Abhi refuses.

The two banter while Meera comes there and Purab asks her why she is marrying long Abhi even after knowing that he loves Pragya.

Meera leaves while Vikram comes there and informs Abhi that Digvijay is coming the next day.

Abhi says that tomorrow is the Haldi ceremony, so there will be no business meetings.

Purab informs him that he will come with Pragya and goes with Abhi hits his foot on the bed and hurts himself.