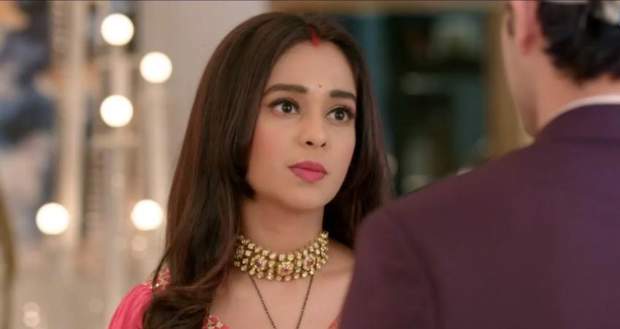 Today's Kumkum Bhagya 7th June 2022 episode starts with Ranbir waking up into reality after seeing Prachi getting stabbed by Rhea in anger.

Stanley asks what happened to Ranbir while he takes his time to understand Stanley’s point about Rhea not giving him a divorce.

Agreeing with Stanley’s point, Ranbir says that Rhea will cause a scene if he asks her to sign the divorce papers.

Despite Stanley apologizing to Rhea for his mistake, Rhea mocks his position and demeanors him for his salary.

Prachi spots Rhea shouting at Stanley and comes to his rescue.

Asking Rhea to behave politely and respect others, Prachi asks Stanley to enjoy the party and leaves with Rhea after her.

Rhea asks Prachi how she dared to insult her in front of that lowly intern and accuses her of crossing her limit.

Prachi says that Rhea herself has long ago crossed the limit of decency by marrying her husband.

Meanwhile, Ranbir tells Stanley that he will make Rhea drunk and take her signatures on the divorce papers.

Stanley applauds Ranbir for the brilliant idea but shudders nervously as Ranbir asks him to make Rhea drunk.

Ranbir helps Stanley to change his get-up into that of a waiter and requests him to help him out.

Sudha and her family arrive at Ranbir’s house and get welcomed by Dida.

Prachi gets extremely happy to see the people she lived with in the past and embraces them with love.

Before Sudha can unfold the news of Ranbir buying the house, Ranbir jumps in and takes away Prachi for a dance.

Prachi and Ranbir dance with each with slowed tunes playing in the background while Rhea burns in jealousy.

Pallavi overhears Sudha talking about Ranbir buying the house from her but gets satisfied on hearing Dida’s words.

Dida tells Pallavi that Ranbir has bought the house so that he can ask Prachi to leave this house.

However, Sahana overhears Dida and gets angry with Ranbir for doing such a thing.