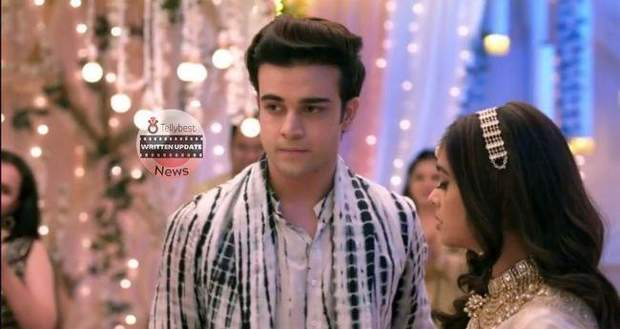 Today's Kumkum Bhagya 7th October 2022 episode starts with Ranbir stopping by Prachi with his car and convincing her that he will drop her at Sarita aunty’s house as he has also not visited her in a long time.

Prachi straightaway denies Ranbir’s offer and says that she does not want to go with him, which offends him.

Just then, Sahana comes there but instantly takes a U-turn as she spots Ranbir and Prachi arguing but Ranbir calls her after spotting her.

Sahana refuses to get involved in his and Prachi’s fight while Ranbir explains that he does not have any problem dropping them at Sarita aunt’s house.

Rhea comes there and asks Ranbir to drop her on his way as she has a bit of an emergency as she gets into Ranbir’s car.

Prachi asks Ranbir to go with Rhea as she is his favorite ride and assures him that she and Sahana will go by themselves.

As no one agrees to his suggestion, Ranbir gets into his car after getting defeated by both Rhea and Prachi and leaves.

Sahana tells Prachi that they should leave for the address where Rhea is about to get a massage to check if what Prachi heard was correct.

On their way, Prachi and Sahana spot Alia’s car and follow her as they might get clues related to Mihika.

Sid sits quietly with his eyes blindfolded as Alia cannot let him know where they are heading.

Meanwhile, Rhea tells Ranbir that she always envisioned them as a perfect couple, and now that they are about to become parents, she is more than happy.

Ranbir clarifies that he never loved Rhea and still does not do and only considers her as one of his mistakes.

As Rhea tries to blame Prachi for ruining their life, Ranbir clearly tells her that he will always love Prachi even though she gets married to Sid.

A major argument breaks out between Rhea and Ranbir and Ranbir asks Rhea to get out of his car after arranging a taxi for her.

Rhea calls Alia and asks her to come to pick her up after being left alone in the middle of the road.

Alia throws Sid out of the car and tells him that they will go to meet Mihika any other day.

Prachi and Sahana notice Sid being thrown out and rush to him after Alia leaves to check on Rhea.

Sid gets injured on his knee for which Prachi and Sahana decide to take him to the hospital.

Elsewhere, Alia suggests Rhea use her pregnancy in her favor and takes her to the hospital to get a fake stomach.

Coincidentally, Prachi, Sahana, and Sid also arrive at the same hospital and go to the second floor in search of the doctor where Rhea meets her friend.

Dr. Madhu (Rhea’s friend) warns Rhea to stop misusing her license but shows her a fake stomach after she requests her.

Just then, Prachi enters the room thinking that it is the doctor’s room who will check on Sid’s wound.

© Copyright tellybest.com, 2022, 2023. All Rights Reserved. Unauthorized use and/or duplication of any material from tellybest.com without written permission is strictly prohibited.
Cached Saved on: Monday 21st of November 2022 03:35:56 AMCached Disp on: Tuesday 6th of December 2022 12:09:38 PM