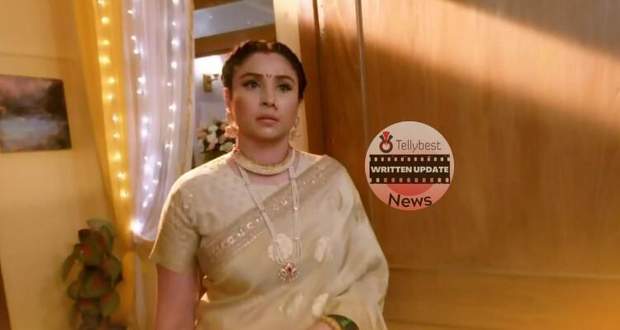 Today's Kumkum Bhagya 7th September 2022 episode starts with Alia deciding to go out for some time and Dida catching on to Alia’s behavior and finding it suspicious.

Alia tells Rhea that she needs to solve the matter of Siddharth once and for all so that he does not dare to speak to anyone about the truth.

Rhea asks Alia what she is planning to do and proceeds to discuss it with Alia while Dida tries to eavesdrop on their conversation.

However, Alia spots Dida and asks what she is doing there in a cheerful tone to distract her from being suspicious.

Dida gets sure that something is gravely wrong and decides to keep an eye on Alia’s actions.

Meanwhile, Sahana and Aryan return to the living room after discussing helping Ranbir and Prachi become closer to each other.

Sahana stares at Ranbir’s dead eyes and tells Aryan to be with him and talk to him as Ranbir needs someone with him at this time.

Aryan agrees with Sahana and goes to Ranbir asking him for water with an assuring pat on his back.

Sahana also tries to talk to Prachi and asks her to have faith in her love as sometimes what shows in the front is not the truth.

Prachi says that she still cannot figure out why Siddharth is acting like that and lying about him being the father of her child.

Elsewhere, Ranbir says that he is feeling dead from the inside as he haves the thought of seeing Prachi getting married to another person.

Ranbir says that if he had discovered their relationship, then he would have broken it off but now their blood has mixed with each other.

As the reason for their relationship is soon going to arrive in the world, Ranbir feels helpless and cannot do anything now.

Ranbir walks away while staring at Prachi while Aryan follows him to talk things out.

In the meantime, Dida reaches a hotel after she follows Alia and spots her talking to some men.

Alia calls Rhea and asks her to bring Siddharth to that hotel as they need to teach him a lesson.

As Aryan suggests Ranbir relax a bit, Ranbir gets furious as he cannot relax while his love is getting married to his own brother.

Ranbir starts hitting the boxing bag in anger with Aryan trying to stop him from doing so as Ranbir’s knuckles begin to bleed.

However, Ranbir mistakenly hits Aryan in anger and Prachi handles him from falling.

Seeing Prachi, Ranbir asks her to leave as he cannot bear to see or talk to her.

Vikram comes and asks Prachi to leave as he will talk to Ranbir about the matter by himself.

Elsewhere, Alia and Rhea threaten Siddharth to kill his sister if he decides to over-smart them after showing him the tied-up body of Mihika (Sid’s sister).

© Copyright tellybest.com, 2020, 2021. All Rights Reserved. Unauthorized use and/or duplication of any material from tellybest.com without written permission is strictly prohibited.
Cached Saved on: Sunday 2nd of October 2022 07:43:26 AMCached Disp on: Thursday 6th of October 2022 05:16:46 PM