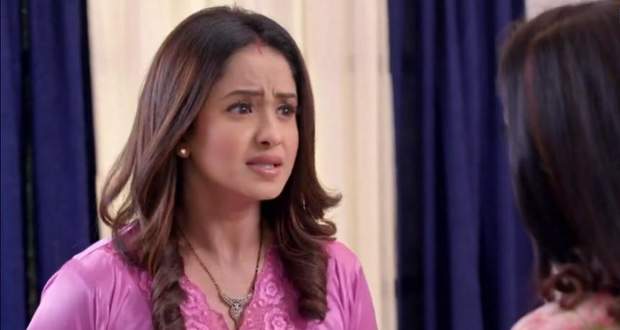 Today's Kumkum Bhagya 8th August 2022 episode starts with Ranbir telling Prachi that his daughter is upset with her mother because she does not take care of herself.

Prachi slowly melts away from Ranbir’s care and smiles on seeing Ranbir talking to their child.

Meanwhile, Rhea plans to manipulate Prachi so that Prachi talks with Ranbir and brings her out of the situation planted by Pallavi.

The next day, Ranbir gets stopped by Rhea on his way to the breakfast table asking him to go with her to talk with Prachi.

Ranbir refuses to talk with Rhea and asks her not to involve Prachi in their matter.

As Rhea further tries to persuade Ranbir, Ranbir shouts at Rhea that he does not want to talk to her attracting everyone’s attention.

Prachi and Sahana come on hearing Ranbir call them and get surprised by Rhea’s words for Prachi.

As Rhea begins to utter poisonous words against Prachi, Ranbir shuts her up and tells her that she is fake in nature while Prachi is honest.

Alia steps in to protect Rhea and says that she is merely telling everyone her heart’s desire which is indeed correct.

To speak from Prachi’s side, Sahana jumps in and says that Prachi knows how to love people while Rhea is yet to learn that.

However, Rhea lands a tight slap on Sahana’s face shocking everyone.

Dida steps forward to confront Rhea but she pushes Dida harshly making her lose balance while Ranbir and Vikram support her.

Just then, Pallavi appears and says that Rhea has crossed all limits and should get out of the house at once.

As Rhea says that she is still Ranbir’s wife, Pallavi brings the divorce papers and says that Ranbir will give the divorce to Rhea.

Prachi requests all of them not to throw Rhea out of the house as she has nowhere to go but Sahana and Aryan ask her not to stand for Rhea.

Rhea tries to blame Ranbir for taking advantage of her thus making her pregnant but Prachi reveals the truth.

Prachi loses her patience and says that Rhea is the one who took advantage of Ranbir by mixing toxic pills in his drink.

Pallavi puts forward the divorce papers to Rhea after Ranbir signs them and tells Rhea to sign them or else she will tell the police that Rhea was the one who helped Nick.

Without having any other way, Rhea signs the papers and throws them toward Prachi with the warning that she will be back.

© Copyright tellybest.com, 2022, 2023. All Rights Reserved. Unauthorized use and/or duplication of any material from tellybest.com without written permission is strictly prohibited.
Cached Saved on: Monday 21st of November 2022 09:27:11 AMCached Disp on: Monday 5th of December 2022 02:23:18 PM