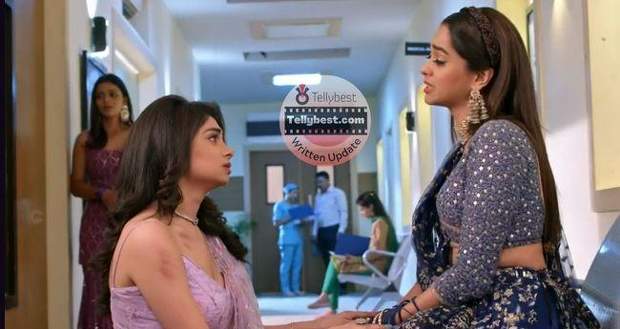 The nurse tells the receptionist how Ranbir’s heart rate was decreasing and got stabilized as soon as Prachi held onto them.

The nurse also says that Prachi requested the doctor to admit Ranbir as he was not permitted admission without calling the police.

Pallavi hears how the receptionist and the nurse praise Prachi’s loving bond with Ranbeer and change her expression.

The family members wait for Pallavi to come and follow her in the direction of Ranbir’s room.

Meanwhile, Prachi tries to ask the nurse about the condition of Ranbir but she does not answer her.

So, Prachi knocks on the door and the doctor comes out and asks her to keep silent as she is disturbing them.

Prachi asks the doctor to let her know about Ranbir’s condition once as she is getting nervous seeing all the ruckus.

The nurse asks the doctor what he has thought about her suggestion after which the doctor asks Prachi to come inside alone.

Prachi comes inside the room while the doctor tells the senior doctor how Ranbir’s heart stabilizes as soon as Prachi touches him.

The senior doctor dismisses the doctor’s words and asks them if they have lost their minds by believing in such a thing.

Prachi goes to Ranbir and requests him to wake up soon as she cannot live without him.

As Prachi gets out of the room, the nurse asks her to pray for Ranbir as he needs a miracle to safeguard his life.

Prachi goes to the temple of the hospital while Pallavi and others arrive at Ranbir’s room.

The nurse says that Prachi has gone to pray after which Pallavi also leaves for the temple along with Alia.

Rhea intentionally forwards her foot making Sahana trip on the floor which starts an argument between them.

Aryan supports Sahana and asks Rhea to stop accusing everyone as she herself is her biggest enemy.

Meanwhile, Prachi prays to God for Ranbir’s life and says she will never ask for anything more if he wakes up.

Pallavi comes there with Alia who says that everything happening to Ranbir is because of Prachi.

However, Pallavi hugs Prachi and thanks her for saving Ranbir’s life which shocks Alia and Rhea.

Pallavi says that she heard how Prachi was the one who saved Ranbir’s life by fighting with the doctor and feels grateful to her.

Just then, Aryan informs them that the doctor has announced that Ranbir’s heartbeat has been stabilized.

Pallavi asks Prachi to come and leaves to see Ranbir while Alia and Rhea burn in envy.

Ranbir comes to his senses and tells the nurse that he wants to meet his wife.

As the nurse informs the family members about Ranbir’s demand, Rhea tries to go inside the room but the doctor stops her.

Aryan goes to call Prachi while Rhea claims to be Ranbir’s wife instead of Prachi.

The nurse decides to ask Ranbir who his wife is so that no confusion remains.

© Copyright tellybest.com, 2022, 2023. All Rights Reserved. Unauthorized use and/or duplication of any material from tellybest.com without written permission is strictly prohibited.
Cached Saved on: Wednesday 25th of January 2023 07:03:36 PMCached Disp on: Tuesday 31st of January 2023 06:46:10 PM