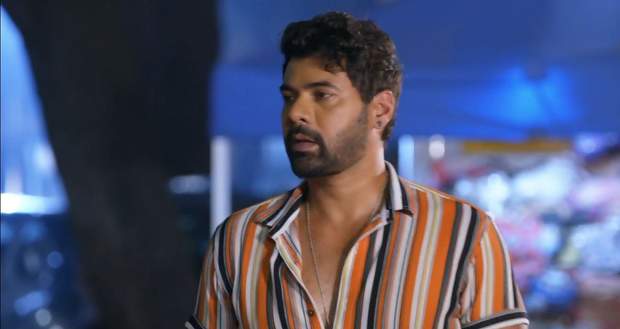 Today's Kumkum Bhagya 8 February 2021 episode starts with Pragya and Abhi promising to never leave each other and complete their marriage.

Abhi ties a white thread on her hand and tells her to think of it as Mangalsutra while she does the same.

He fills her hairline with Sindoor and they congratulate each other while onlookers smile.

Elsewhere, Digvijay asks Commissioner if he didn’t ask Inspector not to arrest his men while the Commissioner gives a benefiting reply that the inspector doesn't have a brother like he has and is not scared of doing his duty.

The commissioner berates Digvijay and asks him why he wants to kill Abhi when he replies that Abhi snatched something from him that was very precious to him.

Digvijay calls some of his men in is the office and hurts his hand while Saritha, Baljeet and other ms wait for Pragya and Abhi at the doorstep for Grahpravesh pooja.

Suddenly, the Kumkum plates fall from Taiji's hands while others get I'm worried thinking it is a bad omen.

Meanwhile, Abhi and Pragya get down from the car while Digvijay's goons come there dressed as police.

They sit in Abhi's car and drive away while the fake Inspector thinks of killing him.

Elsewhere, Vikram tells Ranbir that the prank he played on Rhea of Abhi being in danger as became true and tells him to never say such things because he has a black tongue.

Purab opens some files and gets worried seeing that some of the papers are missing and is about to go while Baljeet stops him and tells him that she is worried for Abhi and Pragya but he assures her that he will call them.

Fake police take Abhi and Pragya to a farmhouse and the fake Inspector informs them that it is his Sister's Sangeet while a fake constable tells him that someone was following them.

© Copyright tellybest.com, 2020, 2021. All Rights Reserved. Unauthorized use and/or duplication of any material from tellybest.com without written permission is strictly prohibited.
Cached Saved on: Sunday 9th of May 2021 10:52:55 PM