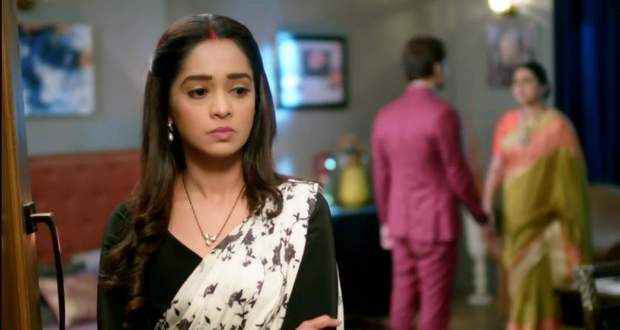 Today's Kumkum Bhagya 8th July 2022 episode starts with Dida spotting Ranbir sitting alone in the room and asking what he is doing there.

Ranbir tells Dida that he is responsible for Prachi’s neglected condition while mentioning how Prachi cares for Rhea.

However, Ranbir asks Dida why Prachi does not talk to him in a kinder way.

When Prachi can forget about her hateful relationship with Rhea, then why can't she talk softly to Ranbir for a sheer moment.

Prachi overhears Ranbir’s conversation with Dida and gets emotional.

As Ranbir spots Prachi standing by the door, he asks her if she hates him to such an extent.

Prachi leaves without answering with Ranbir following after her.

Meanwhile, Pallavi comes to Rhea’s room and asks her how Prachi’s soup was.

Rhea lies that it was awful and she is scared to eat anything made by Prachi as she does not trust her intentions.

However, Pallavi interrupts Rhea and says that she is overthinking as Prachi cannot think badly about Rhea’s baby.

In the meantime, Prachi bumps into a table and hurts her leg which makes Ranbir carry her in his arms.

Prachi asks Ranbir to put her down but Ranbir clearly states that he is taking care of her because he loves her.

After making Prachi sit on the bed, Ranbir takes away the heels from her feet and asks Sahana to bring a pair of flats.

Ranbir asks Prachi to drink water but Prachi refuses to do so.

On the other hand, Vikram beams with happiness as his dream project is going to be fulfilled.

As Ranbir comes out, Prachi follows him in the same heels which makes Ranbir angry.

Ranbir takes away the shoes and goes to his room with Prachi going after him.

As Prachi asks the reason behind Ranbir’s interruption, Ranbir answers that Rhea may want to wear heels seeing Prachi and he does not want that as it is dangerous.

Prachi mocks Ranbir for his care but Ranbir replies that he always wants to live as Prachi’s husband.

Just then Rhea enters and accuses Prachi of snatching Ranbir away from her.

Prachi blames Ranbir for all of that and runs behind Rhea to stop her.

Rhea tells Prachi that she is going to leave the house as she cannot live with Prachi under the same roof.

© Copyright tellybest.com, 2022, 2023. All Rights Reserved. Unauthorized use and/or duplication of any material from tellybest.com without written permission is strictly prohibited.
Cached Saved on: Wednesday 25th of January 2023 08:03:25 PMCached Disp on: Thursday 9th of February 2023 07:59:01 AM