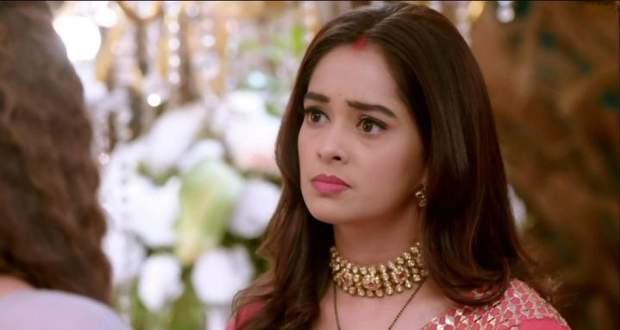 Today's Kumkum Bhagya 8th June 2022 episode starts with Ranbir and Prachi dancing together with each other at the party.

Rhea burns in anger and jealousy on seeing Ranbir getting close to Prachi and thinks of something to interrupt their moment.

Just then, a waiter arrives with drinks in front of Rhea and she throws the drink directly on Prachi’s saree.

Prachi and Ranbir stand shocked and confused while Rhea bursts with anger at the waiter and blames him for the mistake.

However, Ranbir and Prachi both disappear from the party leaving Rhea alone.

Ranbir comes into Prachi’s room behind her and tries to help Prachi but Prachi asks him to leave her alone.

While taking the towel from the bathroom, Ranbir stumbles on a bucket making the floor wet.

After he comes out, Ranbir mistakenly tears Prachi’s saree by stepping on it.

Prachi blasts with anger at Ranbir and blames him for ruining everything intentionally.

Ranbir somehow calms Prachi down and tries to sew her saree but fails in that after losing the needle.

Trying to handle the situation, Ranbir asks Prachi to wear another saree and hands her one that she has never worn before.

Prachi goes to change in the bathroom but sees the floor wet and again blasts at Ranbir for making the floor wet.

Things turn worse when Ranbir discovers the door locked from the outside with him and Prachi trapped inside.

Prachi and Ranbir begin to argue, gradually leading the conversation to Rhea.

Ranbir accuses Prachi of always bringing Rhea into their matters and asks her to think only about them.

Meanwhile, Stanley stops the landlord of the house and her family from leaving and takes them to another room so that Ranbir can make the deal.

Dida gets drunk after drinking the drugged drink and drags Rhea to the room to pack her things up.

Seeing Dida, Pallavi gets stunned as she realizes that she is drunk while Stanley shakes in nervousness as he hides inside the cupboard.

Rhea reveals that Ranbir is going to propose to her making Pallavi jump with happiness.