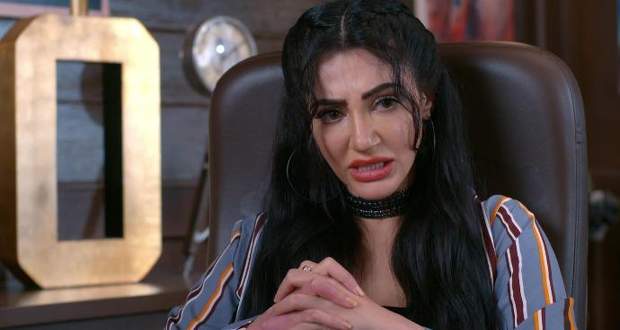 Today's Kumkum Bhagya 8 March 2021 episode starts with Prachi scolding Sahana for helping Ranbir to execute his plans against her will.

Meanwhile, Sarita aunty interrupts and they both leave from there.

In Mehra’s house, Daadi gets worried about Abhi’s condition and cries in front of Aliya.

Aliya somehow consoles Daadi and sends her back to the room while Rhea comes home drunk.

Aliya gets worried about Rhea and makes a plan to get Rhea back to her senses.

Aliya teams up with Tanu and plans to make a close bonding between Rhea and Tanu.

Further, Aliya suggests Tanu get close with Abhi so that she can replace Pragya and marry Abhi once he gets well.

As per the plan, Tanu goes to meet Abhi but he acts insane which makes Tanu scared.

Then, Tanu starts to scream for help while Aliya hears Tanu’s screaming and rushes to help her.

Abhi sees Aliya and hides in the cupboard while Tanu runs out of the room.

Later, Mitali gives Abhi food and gets shocked to see him eating the food like a demon.

The next morning Pragya meets the doctor and gets to know about Abhi’s condition.

© Copyright tellybest.com, 2020, 2021. All Rights Reserved. Unauthorized use and/or duplication of any material from tellybest.com without written permission is strictly prohibited.
Cached Saved on: Friday 6th of August 2021 01:53:19 AM