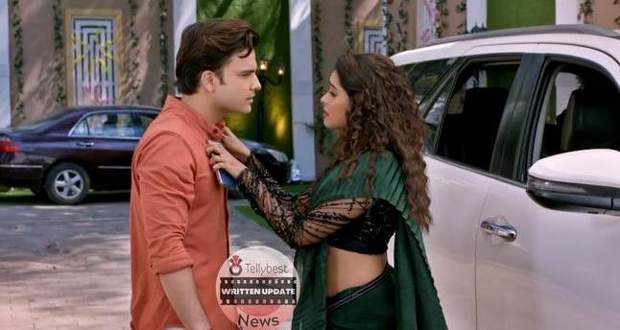 Sid further says that he had earlier made up his mind to not perform any rituals if Mihika wasn't at the ceremony.

Alia threatens Sid saying that his games won't work and will only further put Mihika at risk.

Sid says that since Alia and Rhea paid no heed to his requests to see Mihika he had to get Pallavi involved.

Sid reiterates his ultimatum to not perform any rituals if Mihika isn't present tomorrow.

Rhea gets angry at Sid but is quickly subdued by Alia, while Sid leaves.

Meanwhile, Shahana finds Aryan brooding and asks him what the matter is as she doesn't believe it is all about Mili's breakup.

Meanwhile, Prachi walks into the kitchen for her midnight cravings, when Ranbeer also walks in.

Ranbeer tries to come close to Prachi but she laughs it off.

Prachi asks Ranbeer what did he suddenly remember when Prachi was laughing.

Ranbeer says that Prachi's hunger pangs make her do crazy things but today she is calm and stress-free.

Prachi says that she knows that everything will become alright in the end and so she isn't stressed.

Ranbeer gets very excited to know the reason and Prachi begins to leave.

Ranbeer stops her and tells her that no matter what he loses or gains tomorrow, he will always love Prachi.

Ranbeer also adds that Prachi isn't just a part of his life but a chapter without which his life would be incomplete.

Prachi is very happy to hear that and sheds tears of joy and Ranbeer holds her.

Meanwhile, Rhea urges Alia to bring Mihika to the house.

Alia tells her that Sid is listening to them because of Mihika and if she is brought home then Sid will have no reason to listen to them.

Meanwhile, outside Rhea's room where Prachi is caught by Ranbeer as she is about to fall, Ranbeer then carries Prachi to her room.

In Prachi's room, Ranbeer tells Prachi that he has noticed some favorable changes in her behavior which he is loving.

Meanwhile, Rhea wonders why Prachi is behaving so out of character, as she is engaged to Sid but is getting closer to Ranbeer.

Alia tells Rhea that she doesn't feel Sid and Prachi are engaged, as on the day of their engagement the lights went out.

Alia further says they need to know what games Prachi plans on playing so that Prachi's every move will be answered.

The next morning while Pallavi is overseeing all the work, she orders Ranbeer and Shahana to look after a few tasks.

© Copyright tellybest.com, 2022, 2023. All Rights Reserved. Unauthorized use and/or duplication of any material from tellybest.com without written permission is strictly prohibited.
Cached Saved on: Monday 21st of November 2022 05:45:39 AMCached Disp on: Saturday 10th of December 2022 03:10:11 PM