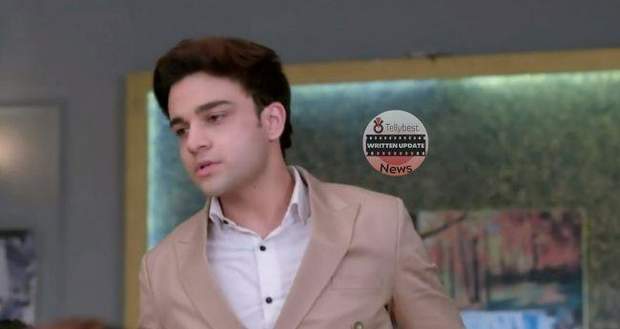 Today's Kumkum Bhagya 8th October 2022 episode starts with Prachi asking Dr. Madhurima if she can help in assisting her injured friend while Rhea quickly turns away from Prachi and covers her face.

Dr. Madhurima tells Prachi that she is a gynecologist and cannot help her with a general emergency.

Prachi apologizes to both Madhurima and Rhea and leaves the cabin while Rhea sighs in relief as she succeeded in hiding her face from Prachi.

Rhea tells Dr. Madhurima about Prachi being her twin sister who is responsible for ruining her life by snatching away Ranbir.

Dr. Madhurima gets amazed by knowing that Prachi and Rhea are sisters and asks Rhea if Prachi heard their conversation.

Meanwhile, Aryan plays catch while sitting in the office while Ranbir enters and bursts into anger instantly.

As Aryan asks Ranbir for the reason, Ranbir says that it is all because of Aryan’s sister which offends Aryan because he thinks Ranbir is talking about Prachi.

However, as Ranbir mentions Rhea, Aryan laughs it off and agrees with Ranbir that Rhea always brings trouble to others.

Ranbir also complains about Prachi turning him crazy while Aryan suggests that Ranbir as his “jiju” is lacking if he has problems with both sisters.

Ranbir clears that he and Aryan are brothers while Rhea is “a dangerous pain” and Prachi is a “beautiful and lovely pain”.

Just then, Sahana calls Aryan and Ranbir gets amazed to see Sahana’s name saved as “Sahana” on Aryan’s phone.

Ranbir asks Aryan if he likes Sahana because he expected Sahana’s number to be saved as something funny.

Aryan denies Ranbir’s claim while Ranbir picks up the call and says “I love you” to Sahana shocking both Aryan and Sahana.

Sahana gets furious and says that she is ready to murder Aryan and has no regrets about going to jail.

Seeing Sahana’s temper, both Ranbir and Aryan get nervous and tell Sahana that it was Ranbir talking and he was joking.

As Sahana tells Aryan that she is at the hospital with Prachi, Ranbir’s expression changes and he leaves the office in a hurry.

Aryan gets to know about Sid getting injured and gives his doctor friend’s contact to help Prachi and Sahana.

At the same time, Rhea tries out the fake stomach and frets out at Dr. Madhurima for making her look like she was 6 months pregnant.

Ranbir arrives at the hospital and asks for his wife. The receptionist mistakes Rhea for his wife and tells him to go to Dr. Madhurima’s cabin.

Aryan also comes to the hospital to stop Ranbir as he will go berserk once he sees Prachi with Sid.

The receptionist tells Aryan about Ranbir’s wife visiting Dr. Madhurima who is a gynecologist which makes Aryan wonder if Sid has gotten pregnant.

Ranbir finds Prachi and Sahana and asks them if everything is okay.

Just then, the receptionist comes and tells Ranbir that there was some confusion and that his wife, Rhea Kohli, is in Dr. Madhurima’s cabin.

Sahana tells Prachi to visit Rhea with Ranbir and find out what exactly is going on with Rhea.

Prachi drags Ranbir with her even though he refuses to visit Rhea as he finds her annoying.

In the meantime, Rhea acts rudely toward Dr. Madhurima due to which she refuses to help Rhea further.

While Rhea shouts at Dr. Madhurima, Ranbir and Prachi enter the cabin and ask what is going on there.

© Copyright tellybest.com, 2022, 2023. All Rights Reserved. Unauthorized use and/or duplication of any material from tellybest.com without written permission is strictly prohibited.
Cached Saved on: Monday 21st of November 2022 07:06:33 AMCached Disp on: Thursday 1st of December 2022 01:28:27 AM