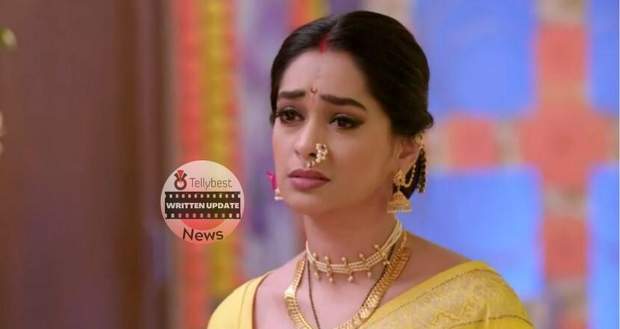 Today's Kumkum Bhagya 8th September 2022 episode starts with Alia slapping one of the goons as he interrupts her between her talk with Rhea and Siddharth.

Alia warns him not to cut her words while she is speaking while Rhea asks her to calm down for a moment.

However, as the goon again speaks between Rhea’s words, Rhea lands a slap on his face and warns him about the same thing.

Rhea and Alia ask Siddharth if he is ready to blindly follow them while they put the knife on Mihika’s neck.

Siddharth agrees to do as Alia and Rhea asks him and begs Rhea to release Mihika on his knees.

Alia says they will keep Mihika with them for a while until Prachi and Siddharth’s marriage is over.

After Siddharth is made to leave the hotel, Alia and Rhea plan to shift Mihika to another place through the backdoor.

Dida spots Alia and Rhea with Mihika and the goons but fails to recognize Mihika as she had never seen her pictures.

While proceeding toward the backdoor, Rhea stops in her tracks and walks toward Dida’s direction suspecting that someone is present there.

Dida hides immediately but Rhea catches a glimpse of her and informs Alia that Dida has seen them with Mihika.

Rhea commands the goons to kidnap Dida like Mihika as they cannot take the risk of leaving her free.

However, Alia hesitates a bit as she does not want another chaos to start because of Dida’s absence from the house.

Alia and Rhea leave the hotel with Mihika while the goons come after Dida who immediately calls Ranbir to ask for help.

Seeing Dida calling, Vikram tells Ranbir that she might be trying to call them to the puja and both of them hurry toward the living room.

Prachi comes with Aryan and tells Aryan to wrap bandages around Ranbir’s wounds.

However, both Aryan and Vikram leave giving Prachi and Ranbir some alone time to discuss things with each other.

Prachi calls Ranbir careless as he cannot see things in front of him and starts to apply medicine to his wounds.

Ranbir pours the entire medicine bottle on his wounds making them burn and says that his entire soul is burning with pain.

Saying that he will keep Prachi and her child happy, Ranbir says that he will make sure that Prachi stays happy wherever she stays.

Ranbir says that his love might change its form but it will continue to root for Prachi till his last breath.

Meanwhile, Dida succeeds to escape through a window in the hotel and Mihika also runs away while Alia and Rhea were having an argument with each other in the middle of the street.

© Copyright tellybest.com, 2020, 2021. All Rights Reserved. Unauthorized use and/or duplication of any material from tellybest.com without written permission is strictly prohibited.
Cached Saved on: Sunday 2nd of October 2022 02:18:49 PMCached Disp on: Wednesday 5th of October 2022 06:47:48 PM