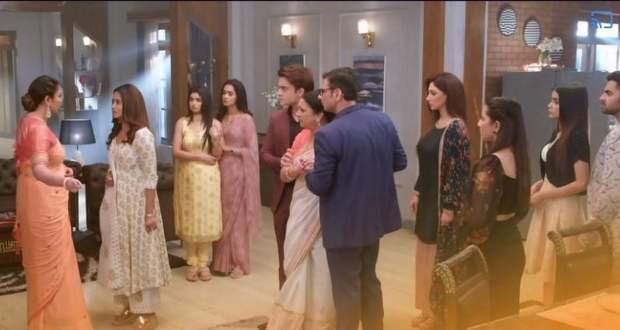 Today's Kumkum Bhagya 9th August 2022 episode starts with Pallavi ordering Rhea to get out of the house after she signs the divorce papers.

As Rhea denies doing so, Pallavi drags her out of the main door and throws her outside; with that Rhea wakes up from her dream.

Rhea panics internally on seeing such a dream and thinks of the possibility of it turning into a nightmare.

While Rhea passes by Prachi’s room, she sees Prachi and Ranbir sleeping while holding hands which boils her blood in anger.

Prachi wakes up slowly and discovers her hands wrapped with Ranbir’s as he is sleeping beside her on the bed.

As Prachi tries to wake up, Ranbir also wakes up from the movement and apologizes to Prachi for coming to bed.

However, Prachi says that Ranbir can sleep on the bed from now on which lights up Ranbir’s mood.

While making the bed, Ranbir and Prachi sneakily stare at each other but get interrupted by Aryan who teases them.

Ranbir scolds Aryan for spoiling the mood and sees Prachi stumbling in her steps by the washroom.

Without wasting a moment, Ranbir catches Prachi and wraps her in his arms while petting her slowly.

Aryan prays to the god for Ranbir and Prachi’s welfare which Sahana watches as she comes to call all of them for breakfast.

On asking Aryan, Aryan says that everything in his life has changed after a certain someone has entered his life.

Sahana thinks that Aryan is talking about Millie and gets a bit upset hearing that.

Meanwhile, Rhea wakes up Alia from her sleep and tells her everything about her dream.

Rhea says that she has a plan and explains it to Alia so that they can start implementing it.

Later, a parcel comes to the house under the name of Pallavi which Rhea tries to receive but fails as the man says he will give it directly to Pallavi.

Elsewhere, Pallavi tells Vikram about her decision to divorce Rhea and Ranbir which makes Vikram happy from his heart.

Alia receives the parcel as Pallavi and checks on the contents to see that they are divorce papers.

Just then, Dida comes and asks Rhea what she is doing followed by the entry of Pallavi, Vikram, Prachi, and Ranbir.

Rhea shows the divorce papers and tears them in front of Pallavi while saying that she will do whatever she wants.

Pallavi steps forward toward Rhea to slap her but Alia stops her hand midway.

© Copyright tellybest.com, 2022, 2023. All Rights Reserved. Unauthorized use and/or duplication of any material from tellybest.com without written permission is strictly prohibited.
Cached Saved on: Monday 21st of November 2022 02:08:30 AMCached Disp on: Monday 5th of December 2022 02:24:26 PM