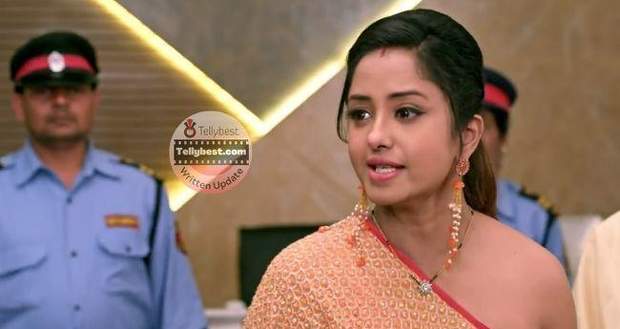 Today's Kumkum Bhagya 9th December 2022 episode starts with Ranbir telling the nurse that he wants to meet Prachi as she is his only wife.

As the nurse tells him about a lady making a scene outside claiming to be his wife, Ranbir understands that it is Rhea.

However, the nurse says that Prachi is his only wife as her touch instantly healed Ranbir when medical science failed to save him.

The nurse comes out and says that Ranbir wants to meet Prachi which makes Rhea’s blood boil in anger.

Prachi bumps into Sid who tells her that he said that Ranbir got shot in an intergang fight to the family.

Prachi comes to Ranbir’s room and learns that Ranbir wants to meet her. Dida asks her to go inside without waiting for anyone’s permission.

Prachi comes inside Ranbir’s room and hugs him while crying on his chest.

Ranbir asks Prachi to look at him and wipes her tears saying that he does not like when she cries.

Prachi asks Ranbir why he did not leave the place when Prachi asked him as something worse than this might have happened to him.

Ranbir assures Prachi that he is still alive making Prachi angry and hitting him angrily.

As Ranbir asks Prachi what she was doing there with Sid, Pallavi enters before Prachi can answer him.

Vikram and others also enter the room and check on Ranbir to see if he is doing fine now.

Ranbir gets confused when he hears that he got shot in the middle of a crowd but understands the situation when Sid signals to him that he explained everything to the family.

Meanwhile, Rhea starts to behave rudely to the staff and patients that come in her way while Alia tries to manage the situation.

Alia says that Rhea is mentally abnormal currently which is why she is acting like that with everyone.

As Rhea asks Alia to stop talking nonsense, Alia starts spitting facts and says Rhea loves a person who is in love with her sister.

Alia says that Ranbir does not consider Rhea a part of his life and uses her like a mere tissue paper.

Rhea gets infuriated upon hearing such things and reminds Alia about her relationship with Purab.

Alia replies to Rhea that she had the status of Purab’s wife in society and she also has to attain that or else she will not get anything.

Later, Prachi and Rhea bump into each other in the corridor and start arguing over the earlier scene at the hospital.

Rhea gets angry when Prachi says that she is Ranbir’s wife and asks her to shut up.

Prachi says that she will expose Rhea’s lies in the next two days if she puts her mind to that, which Rhea turns into a challenge.

Rhea asks Prachi to do everything in her stead and challenges Prachi to expose her and Alia if she can.

© Copyright tellybest.com, 2022, 2023. All Rights Reserved. Unauthorized use and/or duplication of any material from tellybest.com without written permission is strictly prohibited.
Cached Saved on: Wednesday 25th of January 2023 09:34:27 AMCached Disp on: Sunday 5th of February 2023 03:09:43 AM