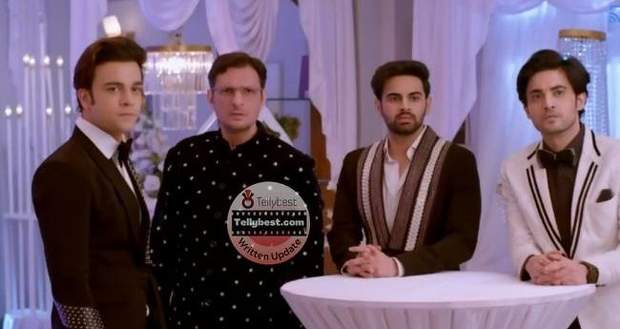 Today's Kumkum Bhagya 9th January 2023 episode starts with Alia entering the Kohli house with everyone left shocked as they did not invite her to the party.

Pallavi comes forward and asks Alia why she has come to their house again when they made it clear that they do not want to see her again.

Dida asks Alia if she has come to grab her belongings and assures her that they will send everything to her later.

Alia laughs and announces that she is there to give everyone the invitation from her side while showing them the reception invitation card.

Alia says that everyone in the Kohli family is going to jail very soon as Rhea has filed a complaint against them.

Dida asks Alia if she and Rhea are taking revenge on them because they did not invite them to the reception, making Alia laugh.

Alia says that Ranbir and the entire family have been charged with a double marriage even though Rhea was already his wife.

Pallavi tells Alia that Ranbir did the right thing by marrying Prachi to which Alia replies that the court approves only evidence and facts.

Alia says that she has submitted the photo of Ranbir and Rhea’s marriage which is the biggest proof of their claim.

Ranbir claims that his marriage with Rhea is not valid as he was still married to Prachi at that time.

However, Alia tackles that question cleverly by asking Ranbir why he married Rhea if he was married to Prachi already.

The lawyer introduces himself as Manish and states that the punishment for illegal second marriages is quite harsh in this country.

Alia wishes the Kohli family the best of luck and says that they will meet again in court for the hearing.

Everyone’s mood gets spoiled and Vikram asks Pallavi to inform all the guests that the party is canceled after Alia leaves.

Alia promises herself that she will destroy the Kohli family completely with her plans.

Later, Dida and Pallavi pray for the safety of the family so that no evil shadow dwindles over them.

The next morning, Ranbir watches Prachi staring outside and apologizes to her for creating such a situation where the entire family has to go to court.

Prachi suggests they should go and talk to Rhea as her heart is saying that Rhea has changed now.

Ranbir hesitates a bit but finally agrees to meet Rhea for Prachi.

Meanwhile, Alia sends Rhea to the office to sign some papers and motivates her to move on in her life.

Rhea regrets her decisions after spending time in the office and realizes that she is responsible for ruining her life.

Ranbir and Prachi come to visit Rhea at their house but Alia says that Rhea has gone to the office with a sour tone.

Prachi calls Rhea after reaching the office and tells her about the legal notice which shocks Rhea.

Rhea asks Prachi and Ranbir to come to Alia’s cabin but Alia’s men mislead them in a different direction.

Rhea tells Alia that she did not do the right thing by sending a legal notice to Ranbir using her name.

© Copyright tellybest.com, 2022, 2023. All Rights Reserved. Unauthorized use and/or duplication of any material from tellybest.com without written permission is strictly prohibited.
Cached Saved on: Wednesday 25th of January 2023 11:45:55 AMCached Disp on: Sunday 5th of February 2023 02:40:37 AM